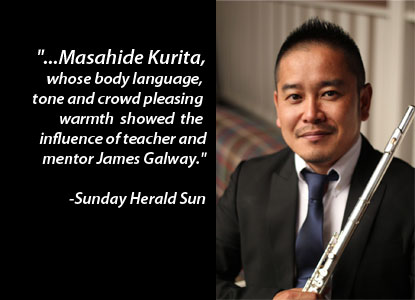 Masahide Kurita cultivates and performs an extensive repertoire covering many of the seminal works composed for his instrument from the baroque to the present day. His highly polished technique and rich tone, depth and clarity of musical expression, as well as his delicately nuanced attention to detail give hisÂ music-making a rare honesty, beauty and flavour unlike other flautists. Masahide is currently working as a casual with the Melbourne Symphony Orchestra.

Masahide studied at the Tokyo National University ofÂ Fine Arts and Music also attended lessons and master classes in the U.S.A., Switzerland, and the United Kingdom with influential and highly respected Flautists such as Sir James Galway, Jacob Berg, and Wolfgang Schultz. After his studies in Tokyo, Masahide began a two year Diploma of Performance at the Royal Academy of Music in London, under the tutelage of William Bennett and Kate Hill.

Masahide Kurita has taken lessons and master classes with Sir JamesÂ Galway in Japan, the United States, and Switzerland. His meeting andÂ subsequent lessons with Sir James Galway have been fundamental in shaping hisÂ artistic tone development, outstanding technical virtuosity and ultimately realizing the immense potential of his sensitive and profound musicality.