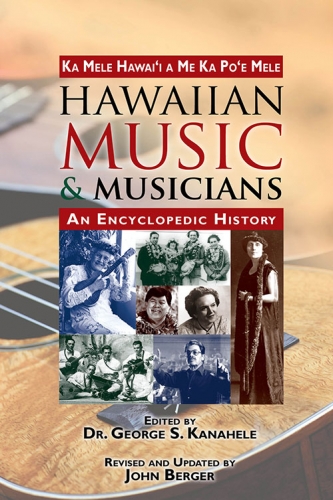 George S. Kanahele published his monumental Hawaiian Music and Musicians: An Illustrated History in 1979. Compiled with the assistance of a hundred contributors and the research of many more, it was immediately recognized as the most ambitious book ever written about Hawaiian music.

The book is arranged alphabetically, with entries on Hawaiian music from its roots in ancient chants to the flowering of the musical renaissance in Hawai'i. It describes leading personalities and groups, organizations, songs and publications, and discusses the extraordinary popularity of Hawaiian music round the world. There are biographies of musicians from every period of Hawaiian musical historyâ€”from Henry Berger, David KÄlakaua, Queen Liliâ€˜uokalani, and others of their time, to the great names of the 20th century.

In 2000 Dr. Kanahele asked veteran music critic John Berger to work with him on a second edition; Dr. Kanahele passed away a few months later. It took John Berger another dozen years to complete this Revised and Updated Hawaiian Music and Musicians: An Encyclopedic History (Mutual Publishing, 2012). The book is now more than doubled in length, with almost every entry revised and updated, and with almost 100 new entries. In this talk, John Berger will be discussing the process of revising and editing this immense musical history.