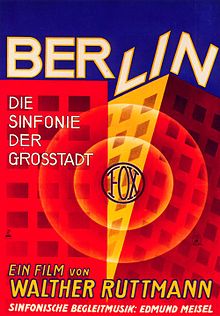 Berlin, Symphony of a Great City (1927), directed by Walter Ruttmann. This early montage film of a day in the life of the growing metropolis was influenced by Sheeler and StrandÊ»s Manhatta (1921) and subsequently influenced Dziga VertovÊ»s Man with a Movie Camera (1929).