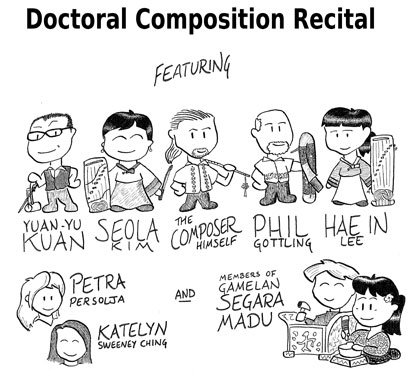 John Chow Seymour will present a performance of his works as part of the requirements for the degree PhD in Music Composition.

Composer John Chow Seymour studies musical genres from around the world and his compositions bear the influence of these studies. This doctoral recital will feature works for both Western and Asian instruments, any of which might be influenced by Western or Asian compositional techniques. Selections include one movement from the prize-winning "Chamber Concerto in Sinawi-Jo" for Korean instruments (one winner of the 2010 "Call for Scores" competition sponsored by South Korea's Nationak Gugak Center), "The Five-Flower Story" for Balinese Gamelan (sponsored by a grant from the Honolulu Mayor's Office of Culture and the Arts), and "Ten Miles Fading Red," which the composer will perform himself on a Chinese flute called a "Xiao" (sponsored by the Orvis Foundation's "Musicians in the Museum" program in conjunction with the Honolulu Museum of Art).