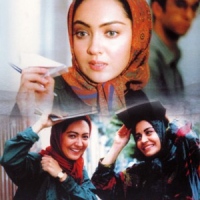 Two Women ("Do Zan") depicts the lives of two friends who were architecture students and shows the life of one of them, in particular, during a fourteen-year period.