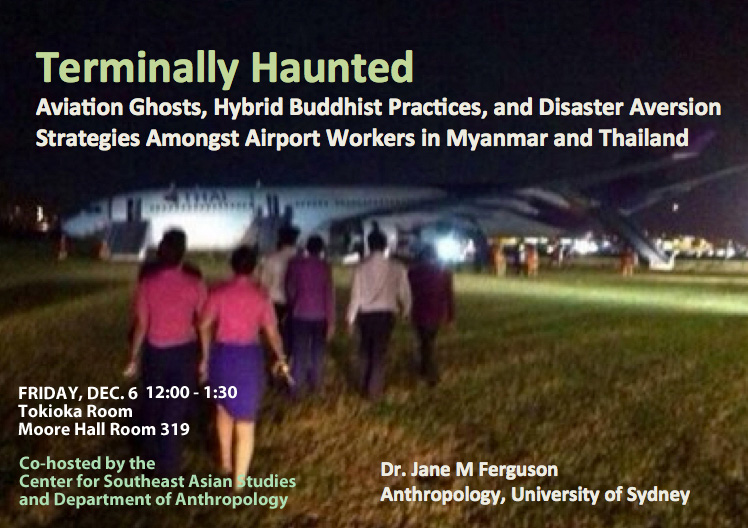 Much of what is written about airports is from the perspective of a visionary architect, or from the experience of the cosmopolitan traveler. Airport workers, aside from their intimate knowledge of the airport space, know something about terminals that their designers and itinerant occupants do not: how they are haunted. In Yangon, Myanmar and Bangkok, Thailand, airport workers exchange occupational ghost lore regarding sightings, motives, and histories of spirits within aviation. They also make use of hybrid Buddhist practices to ward off danger from airport spaces, and to make their own future travels safe and propitious. In addition to challenging the notion of the airport as the â€˜non-place,â€™ this paper will demonstrate that ecumenical practices and hauntings crucially frame techno-modernity, uniting local and trans-regional culture with the global semantic legibility of the logistic superstructure of passenger aviation.

Dr. Jane M. Ferguson completed her PhD in Anthropology at Cornell University in 2008, having carried out over two years of fieldwork amongst Shan insurgents and their affiliates at the Thai-Burma border. She later taught Southeast Asian History at the Australian National University, and for the past year and a half has been on a research fellowship at Sydney University. Her research interests span from issues of history and ethno-nationalism, to popular culture production and re-signification, to ethnographic approaches to electricity and power grids in Burma/Myanmar and Thailand.