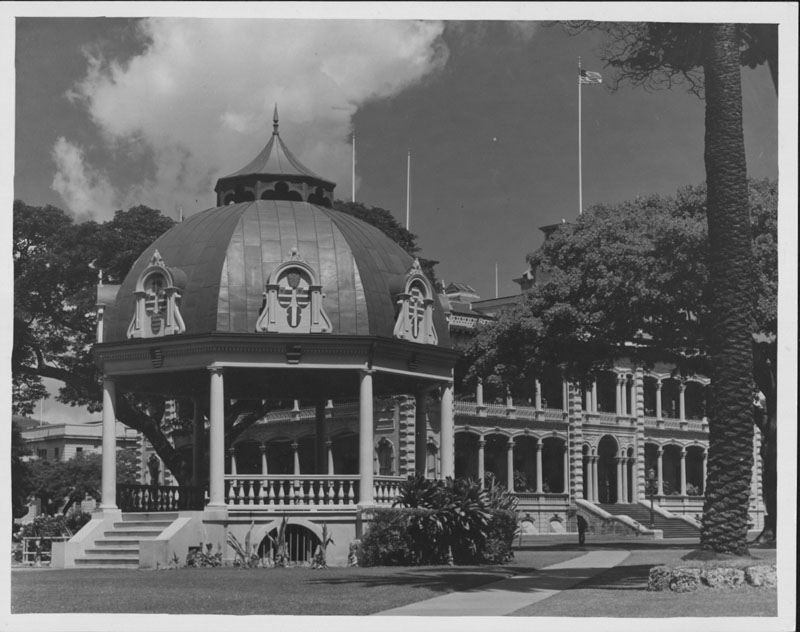 This exhibition celebrates the Royal Hawaiian Band as a living legacy from the Monarchy Period of HawaiÊ»i (1810-1893). Established by King Kamehameha III in 1836 as The Kingâ€™s Band, it reached its zenith during the KalÄkaua Dynasty under its most celebrated bandmaster Henry Berger. It is the only band in the Pacific region founded on the initiative of a reigning sovereign rather than a colonial power. It is the oldest extant public brass band in the United States.

During the nineteenth century, HawaiÊ»i established itself as a sovereign kingdom, replete with the internationally-recognized symbols of nationâ€”including a palace, a system of royal medallions, and the brass band. The Royal Hawaiian Band developed its current musical identity under the 43- year stewardship of Bandmaster Captain Henry Berger (Heinrich Berger), an energetic kappellmeister recruited by King Kamehameha V from the Prussian German court of Potsdam. Berger re-organized the band and programmed both band arrangements of Hawaiian songs and international classical and semi-classical repertory of the Western tradition.

The Band became a flashpoint of resistance during the overthrow of the Monarchy in 1893. Band members refused to sign the oath of allegiance to the American regime. Under the leadership of â€œManilamanâ€ JosÃ© Libornio, band members loyal to Queen LiliuÊ»okalani organized as the Hawaii National Band and toured the mainland U.S. garnering support for the restoration of the Monarchy. Further, members of this Band commissioned the song of resistance, â€œKaulana nÄ Pua.â€

The Royal Hawaiian Band is now a municipal band within the City and County of Honolulu. In this capacity it has served for more than a century as an official symbol of HawaiÊ»i, both here and abroad. It toured Europe in 1983. Its indigenous and multi-cultural heritage is reflected by bandmasters over the years of German, Portuguese, Japanese, English, and Hawaiian ancestry. The present bandmaster is Clarke Kuhaupio Bright. The Band presently has 35 members and performs regularly at Ê»Iolani Palace and KapiÊ»olani Park.

The exhibition is organized by the Friends of the Royal Hawaiian Band (www.royalhawaiianband.com) with artifacts from its collection and from the archives of the Royal Hawaiian Band (www.rhb-music.com). Co-curators are David W. Bandy and Dr. Teri Skillman. Mahalo for kokua to Bandmaster Clarke K. Bright, Friends President Antoinette Lee, and Dr. Ricardo D. Trimillos.