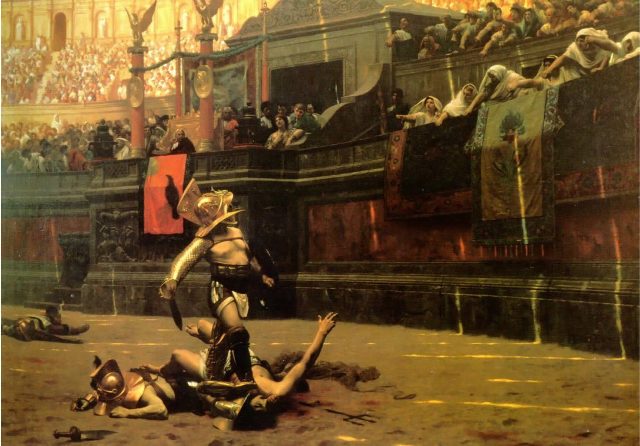 HOW TO STATE A BLOODBATH IN THE ROMAN ARENA

Drawing on a wealth of iconographic, epigraphic, and literary evidence, we survey the scale and variety of stage sets, artificial scenery, and other apparatus used to enhance the spectacle. Not only were installations specifically built to accommodate sets (think of the Colosseumâ€™s famed hypogeum) but amphitheatral staff were specially dedicated to overseeing their proper deployment.

Beyond the raw wonder stagesets elicted from spectators, they more importantly played an important role in making the violence of the games palatable and acceptable: the sets â€“ along with the overall constructed environment, the costumes of the performers, the musical accompaniment, the added attractions (acrobats, animal performers, mock fighters, prize distributions) â€“ set the brutality into an artificial and theatrical context for the spectators, and as such played an analogous role for the way violence is similarly framed in modern entertainment.