The Fragility of Things - a book talk by author William E. Connolly 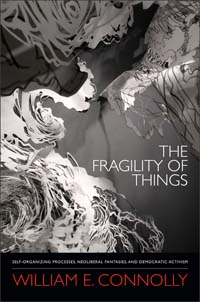 In The Fragility of Things, eminent theorist William E. Connolly focuses on several self-organizing ecologies that help to constitute our world. These interacting geological, biological, and climate systems, some of which harbor creative capacities, are depreciated by that brand of neoliberalism that confines self-organization to economic markets and equates the latter with impersonal rationality. Neoliberal practice thus fails to address the fragilities it exacerbates. Engaging a diverse range of thinkers, from Friedrich Hayek, Michel Foucault, Hesiod, and Immanuel Kant to Voltaire, Terrence Deacon, Friedrich Nietzsche, and Alfred North Whitehead, Connolly brings the sense of fragility alive as he rethinks the idea of freedom. Urging the Left not to abandon the state but to reclaim it, he also explores scales of politics below and beyond the state. The contemporary response to fragility requires a militant pluralist assemblage composed of those sharing affinities of spirituality across differences of creed, class, gender, sexual orientation, and ethnicity.

William E. Connolly is Krieger-Eisenhower Professor of Political Science at Johns Hopkins University. His most recent books include A World of Becoming; Capitalism and Christianity, American Style; and Pluralism, all also published by Duke University Press. He is a former editor of Political Theory and a founder of the journal theory & event. His classic study The Terms of Political Discourse won the Benjamin Lippincott Award in 1999.