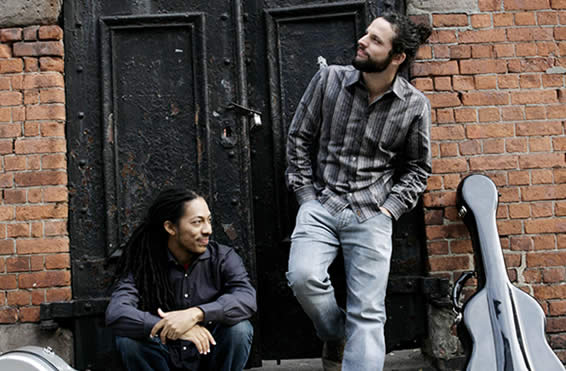 Brasil Guitar Duo, a 2006 winner of the Concert Artists Guild International Competition, and hailed by Classical Guitar magazine for its "maturity of musicianship and technical virtuosity," is equally at home on a classical or a world-music series. Its innovative programming features a seamless blend of traditional and Brazilian works, resulting in a full global touring schedule and a growing catalogue of critically acclaimed recordings.

The Duo has appeared internationally on major concert series and at festivals in Germany, England, South Korea, and Poland. U.S. engagements have included recitals in such major cities as New York, Santa Barbara, Miami, Houston, and Tucson.

Eager advocates for both traditional and new concerti for two guitars and orchestra, the Duo premiered a work by Brazilian composer Paulo Bellinati with the SÃ£o Paulo Symphony Orchestra, under the direction of Giancarlo Guerrero, in June 2012.

The Duo`s first CD, in 2007, was Bom Partido, a CAG Records release featuring all Brazilian repertoire that prompted Steve Marsh to write in Classical Guitar, "The maturity of musicianship and technical virtuosity displayed on this debut recording by JoÃ£o Luiz and Douglas Lora is simply outstanding. The original compositions by Douglas Lora comfortably stand alongside the `big names` on the rest of the programme and are well crafted and very appealing new works."

Two critically acclaimed CDs on the Naxos CDs, released in 2008 and 2009, contain the complete works for two guitars by Mario Castelnuovo-Tedesco. The Duo has also won praise for its latest CD, released on the Avie label: a collaboration with flutist Marina Piccinini that features all of J.S. Bach`s sonatas for flute and harpsichord, as arranged by the Duo for flute and two guitars.

Brasil Guitar Duo actively strives to expand the repertoire for two guitars, with Lora contributing works of his own and Luiz arranging both classical and Brazilian music. Appearing frequently in diverse non-traditional spaces, the Duo brings a broad repertoire of classical guitar duos combined with the traditional music of its native land.

A University of Hawaii at Manoa Outreach College production. Part of a Performing Arts Presenters of Hawaii tour. Partial funding provided by the Hawaii State Foundation on Culture and the Arts.