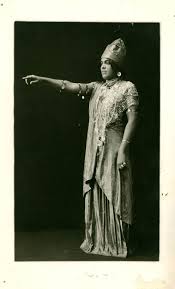 â€œThe Witch of Endor Slept Here: Du Bois and the Crisis of the George Washington Bicentenaryâ€

In 1932, the United States held a year-long commemoration of the bicentennial of George Washingtonâ€™s birthday for which it sought theatrical representations of Washingtonâ€™s life and achievements. African-American activist W.E.B. Du Bois wrote a play, published in Crisis in 1932, titled â€œGeorge Washington and Black Folk.â€ This short play de-emphasizes Washington, while illustrating the positive achievements of African Americans. As his narrator, Du Bois chose a mysterious Biblical figure: the Witch of Endor. Oâ€™Malley will argue that Du Bois himself, like the Witch of Endor, was a medium, bringing significant black historical figures back from beyond, as progenitors of a newly formulated African-American legacy.

Lurana Donnels O'Malley is a Professor in the Department of Theatre and Dance. She teaches in the areas of Western European and American theatre, with research specializations in Russian and African-American theatre. Her 2006 book The Dramatic Works of Catherine the Great was the first monograph in any language on the plays and operas written by the eighteenth-century empress. Her most recent research concerns early twentieth-century pageants and history plays by African-Americans. O'Malley also directs plays at Kennedy Theatre.