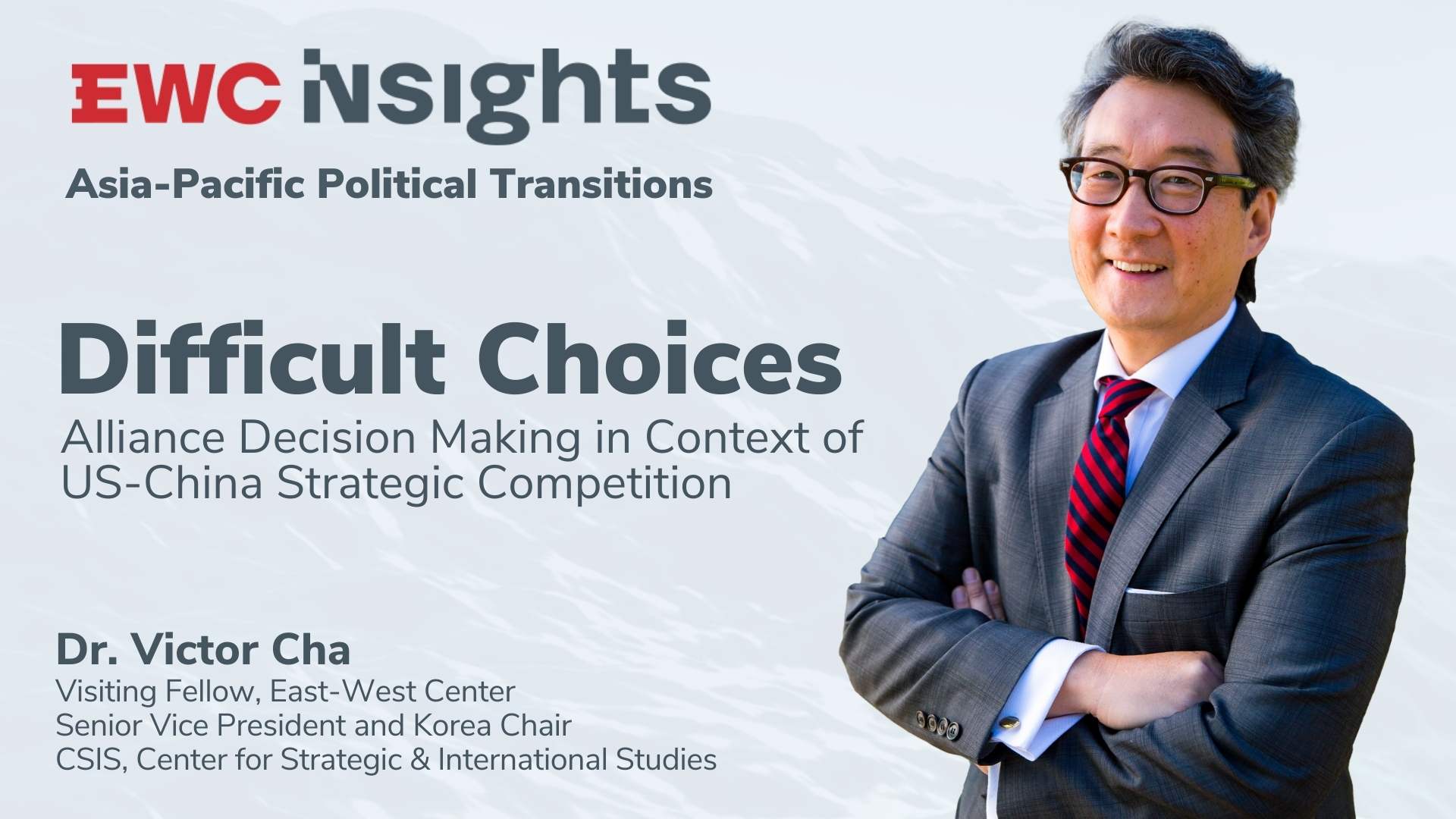 Difficult Choices: Alliance Decision Making in Context of US-China Strategic Competition featuring Dr. Victor Cha Visiting Fellow, East-West Center Senior Vice President and Korea Chair, CSIS, Center for Strategic & International Studies Secondary states in the international system are confronted with less hedge space and zero-sum binary choices in an era of US-China strategic competition. How do US allies assess such decisions? Under what conditions do they hedge, align with the US, or accommodate China? Dr. Cha builds a model to answer this question with regard to key US allies such as Korea, Japan, and Australia. Dr. Victor Cha holds the D.S. Song-KF Professorship in Government and International Affairs at Georgetown University. In July 2019, he was appointed vice dean for faculty and graduate affairs in the School of Foreign Service (SFS). He is also Senior Vice President and Korea Chair at the Center for Strategic and International Studies in Washington, D.C. He left the White House in 2007 after serving since 2004 as Director for Asian Affairs at the National Security Council. At the White House, he was responsible primarily for Japan, the Korean peninsula, Australia/New Zealand and Pacific Island nation affairs. Dr. Cha was also the Deputy Head of Delegation for the United States at the Six Party Talks in Beijing, and received two Outstanding Service commendations during his tenure at the NSC. He is the author of five books, including the award-winning Alignment Despite Antagonism: The United States-Korea-Japan Security Triangle (Stanford University Press) (winner of the 2000 Ohira Book Prize), and The Impossible State: North Korea, Past and Future (Harper Collins Ecco, 2012) which was selected by Foreign Affairs as a “Best Book on the Asia-Pacific for 2012.” His newest book is Powerplay: Origins of the American Alliance System in Asia (Princeton University Press, 2016). He has testified before Congress numerous times on Asian security issues. In 2018, he joined NBC and MSNBC as a News Contributor. Prior to joining NBC, he had been a guest analyst for various media including CNN, ABC, NBC, CBS, The Colbert Report, Sports Illustrated, ESPN, Fox News, PBS, Huffington Post, Wall Street Journal, MSNBC, CNBC, BBC, and National Public Radio. His op-eds have appeared in the Washington Post, New York Times, Los Angeles Times, USA Today, Foreign Policy, Japan Times, and Financial Times. He holds a B.A., an M.I.A., and a Ph.D. from Columbia University, as well as an M.A. from Oxford University.