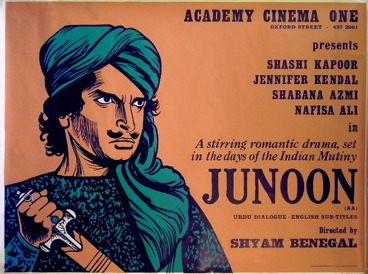 'Junoon' (Obsession) is set against the backdrop of the dramatic 1857 Indian uprising against British imperial rule. In the aftermath of a bloody assault on a church, a colonial family is forced to seek shelter with one of the leaders of the rebels, who â€“ despite already being married â€“ falls in love with the beautiful young daughter. The intimacy of the 'other' creates a tense situation that escalates across the film along with the rebellion, and the complicated relationships between individuals act as a metaphor for the intertwined nature of colonial society: Indian and English, colonizer and colonized.

'Junoon' (1978) won a National Film Award and a Filmfare Award, amongst a host of other honors. Directed by the acclaimed Shyam Benegal, the film features a legendary cast including Shashi Kapoor, Naseeruddin Shah, Shabani Azmi, and Nafisa Ali.