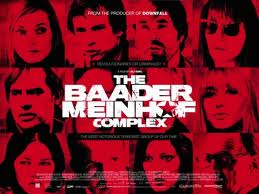 Baader Meinhof Complex (2008) - directed by Uli Edel. From 1970 to 1998, the Red Army Faction - a left-wing terrorist group - dominated the headlines in West Germany, as it held up banks, planted and set off bombs, kidnapped prominent West Germans and hijacked planes. This recent Oscar-nominated film chronicles the history of the group, from its origins to its dissolution. 150 mins. In German with English sub-titles.