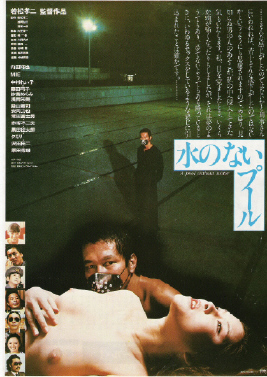 A Pool Without Water

Synopsis
A man experiencing a mid-life crisis drugs and rapes women while they sleep. Based on a true story.

Notes
Last semester we watched a selection of director Koji WAKAMATSU's 1960s films, now see what he was up to in the 1980s!

Spring 2012 Film Series
Join the East Asian Film Society every other Tuesday at the Center for Korean Studies Auditorium. For more information please look at the Detailed Schedule.