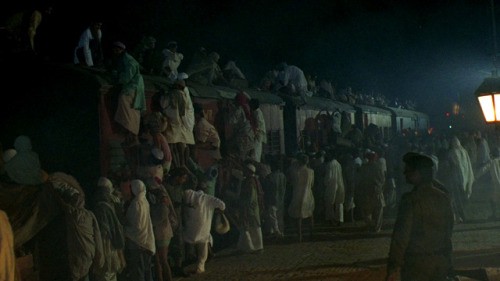 'Train to Pakistan' is not Bollywood cinema, but rather a movie adaptation of Khushwant Singh's classic 1956 novel of the same name. Notably, it is a co-production between India's National Film Development Corporation and Channel Four Films of Britain.

The movie, like the novel, is set during the summer of 1947 in the small Punjabi village of Mano Majra, inhabited largely by Sikhs and Muslims. The simple story revolves around the lives of several villagers, including Jaggat Singh, who is in a clandestine relationship with a Muslim girl, Nooran. As news approaches of a possible impending partition of the Punjab - dividing it between the new nations of India and Pakistan - tensions rise in the village, and a local magistrate is dispatched to mitigate the situation. The arrival of a suspicious agitator to Mano Majra, and then the shocking appearance of a ghost train, finally drag the tiny hamlet into the vortex of chaos that engulfed India during its Partition.

This is the third movie in the 17th UH Bollywood film series, this spring running one Monday afternoon per month. For a copy of the full film series schedule for the semester, please see the contact information below.