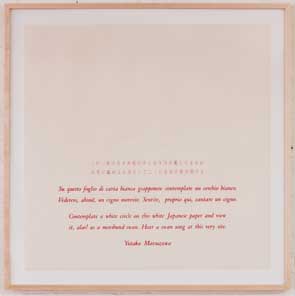 Events + Programs (events are free and open to the public)

2:00 – 3:00 p.m., Walkthough of the exhibition by co-curators Alan Longino and Reiko Tomii

"Yutaka Matsuzawa: Towards Quantum Art" is the first major solo exhibition in the United States that presents the work of the elder statesman of Japanese conceptualism, Yutaka Matsuzawa (1922–2006). It is also the first presentation of Matsuzawa’s work in Hawaii.

Matsuzawa emerged in the early 1960s with his singular text-based practice as part of the country’s Anti-Art (Han-geijutsu) movement. His conceptualism combines his eschewal of materialism with an eclectic interest in philosophy and religion (especially non-Zen Buddhism), the occult and parascience, UFOs and contemporary physics (especially quantum physics and astrophysics). The result was “art of kannen,” wherein "kannen" signifies both the modern sense of “idea” and the ancient Buddhist sense of “meditative visualization,” that would transcend time and space with a far-reaching implication for human civilization.

The exhibition "Yutaka Matsuzawa: Towards Quantum Art" is co-curated by Alan Longino and Dr. Reiko Tomii and originated at Yale Union, Portland, OR.

Re-published alongside this exhibition, for the first time in nearly three decades, is the artist’s seminal publication, Quantum Art Manifesto (1988). Copies of this new publication, including a text by Dr. Reiko Tomii and foreword by Haruo Matsuzawa, are available. An exhibition copy is on display.