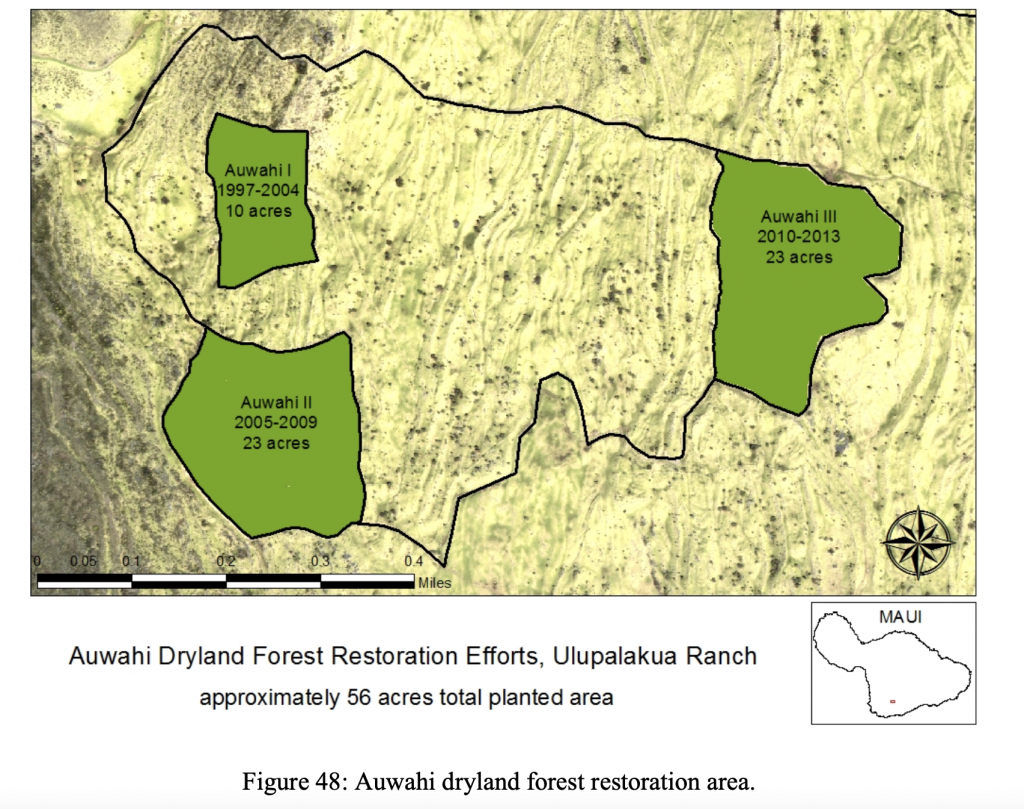 The Hawaiian dryland montane forest is considered one of the most biologically diverse ecosystems in the islands; however less than 10% of Hawai‘i’s original dry land forest remains (Medeiros and von Allmen, 2006). The southwestern leeward slopes of Haleakalā Volcano were once covered with healthy dryland forests but these forests have been severely impacted by invasive species, human development, fire and agricultural practices. Feral ungulates, including goats, pigs, cattle, and sheep have consumed the native vegetation, and fire prone alien grasses now dominate the understory in most dryland forest ecosystems. Native Hawaiian plants did not evolve with mammalian herbivores or frequent disturbance, so they do not survive well under these increased pressures (Medeiros and von Allmen, 2006). In recent decades, a multi-agency collaboration, spearheaded by Arthur Medeiros of the USGS, has focused efforts on the reestablishment of the native dryland forest of East Maui in Auwahi and Kama‘ole districts (Medeiros, 2003). Extensive field exploration in the late 1980’s (Medeiros et al., 1986) called attention to the deterioration of the leeward dryland forest on the slopes of Haleakalā, and the Auwahi region was identified as prime area to focus conservation efforts (Erdman et al., 2000). Auwahi is one of the last remaining relatively intact dryland forests in the state of Hawai‘i and is home to greater variety of native trees than nearly any other dryland forest in the state (Medeiros et al., 1986). A land owner (‘Ulupalakua Ranch), resource managers, scientists, and volunteers began an effort to restore a 10 acre section of this dryland forest beginning in 1997. The area was completely fenced to exclude grazing animals, and measures were taken against alien grass and other invasive species, using herbicides and fast growing native species. Botanical members of the original community were protected and added as necessary. Since the initial restoration efforts began the project has expanded and now covers a total of 56 acres at three different sites (Figure 48).