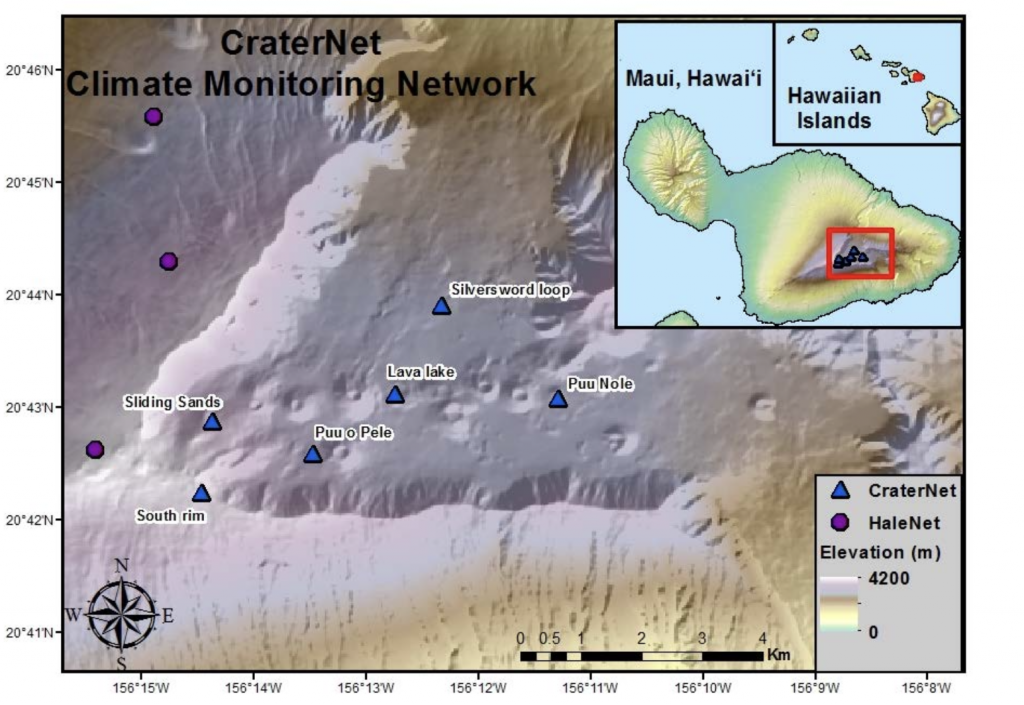 CraterNet consists of 13 weather stations located in Haleakalā crater (a large erosional depression near the summit) as part of an effort to monitor endemic plant and insect species at high elevations. This network began operating in July of 2010 and spans an elevation gradient of 971 m (1927 to 2898 m), encompassing the major geographic range of the current Haleakalā silversword (Argyroxiphium sandwicense subsp. macrocephalum), an iconic, threatened plant species endemic to the upper portion of Haleakalā. Station locations were chosen based on population density of the silversword and proximity to existing or planned silversword research plots. The six stations established in 2010 are equipped with instrumentation to measure hourly precipitation, air temperature, relative humidity, soil temperature (5 cm depth), and leaf wetness. Two sensors at each station monitor soil moisture in an area of exposed soil and beneath a healthy plant. In 2016, the network was expanded and seven additional stations were installed. These stations measure RF, Ta, RH, and soil moisture exclusively. CraterNet was established by and is currently maintained by the project PI at the University of Hawai‘i Mānoa Department of Plant and Environmental Protection Sciences (PEPS). CraterNet data are managed jointly by PEPS and the Giambelluca Ecohydrology Laboratory, University of Hawai‘i at Mānoa (https://sites.google.com/a/hawaii.edu/ecohydrology_lab/home).