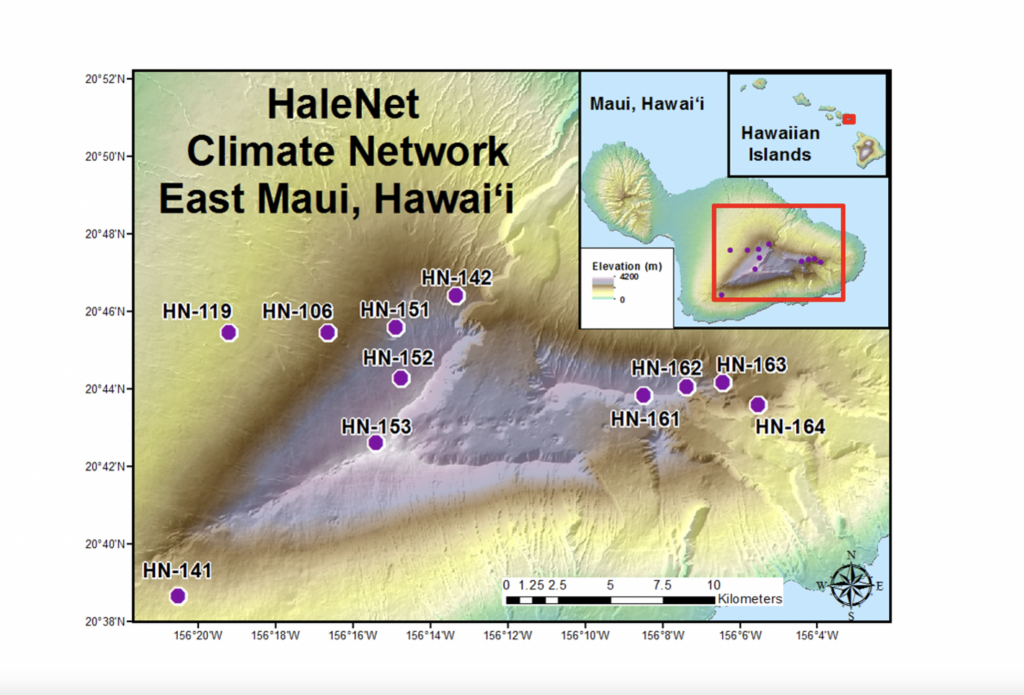 The Haleakalā Climate Network consists of two transects of climate stations along the leeward and windward slopes of Haleakalā Volcano, Maui Island, Hawai‘i. The upper elevation stations are within Haleakalā National Park. HaleNet was established in 1988-90 on the relatively dry west-northwest facing (leeward) slope. The first stations were established in June 1988 at elevations of 960, 1640, and 2120 m. In 1990, stations were added at 2590 and 2990 m. With at least 24 years of data, these stations now provide an excellent baseline for assessing climate variability and change. We continue to monitor climate along this transect to provide indicators of global warming effects on Hawaii’s climate and biota.

Of the eleven stations that once operated in the HaleNet climate network only eight are still in full operation (blue circles in the firgure above).  The Waikamoi station (HN-142) which was only erected on a temporary basis was removed in August of 2003. The Horseshoe Pu`u station (HN-163) at 1960 m elevation was badly damaged in 1996 by lightning and high winds and is no longer recording data.  The Pu`u Pahu station (HN-106) at 1650 m elevation was vandalized in 2003 and now only collects rainfall data. The entire Network has a vertical coverage 810 m (1650 – 2460 m) and 2030 m (960 – 2990 m) along the windward and leeward exposures respectively

The complex topography of Haleakalā interacts with atmospheric circulation to produce some of the most spatially complex rainfall patterns in the world.  Desert-like precipitation minimum zones and extreme wet conditions can be found within a few tens of kilometers distance