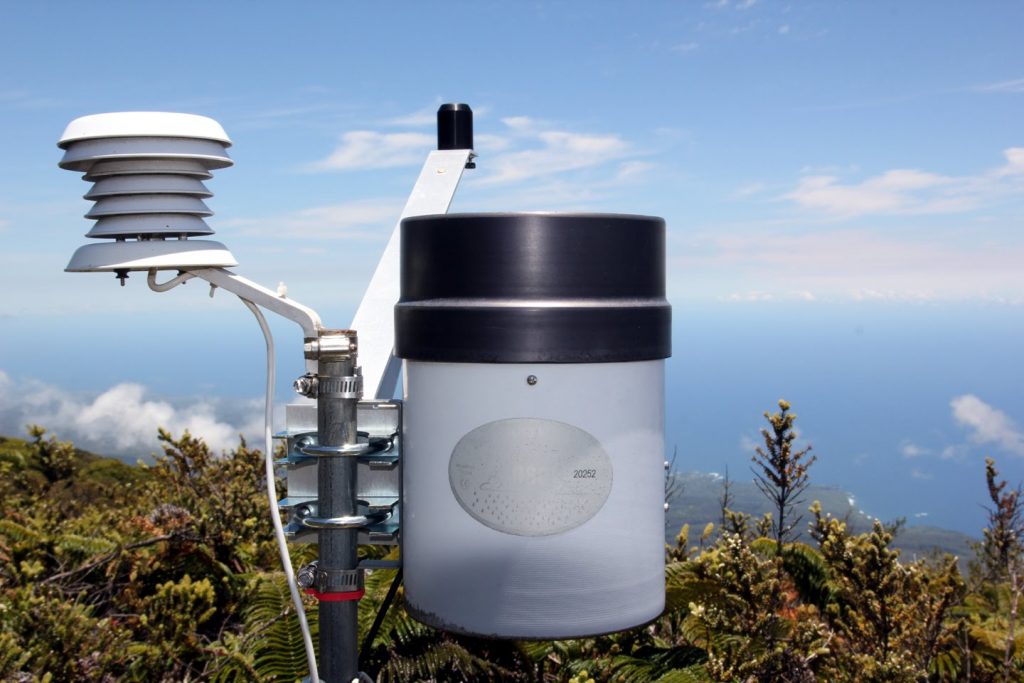 To learn more, read Climatology of Haleakalā by Ryan Longman or visit: https://sites.google.com/a/hawaii.edu/ecohydrology_lab/current-research/little-halenet

The high-elevation northeastern slopes of Haleakalā Volcano are home to some of the most remote and undisturbed forest ecosystems in Hawai‘i. These ecosystems are dominated with native vegetation, insects and bird species. Early Hawaiians did not use these high- elevation lands extensively (Burney et al., 1995) and current conservation efforts put forth by Haleakalā National Park and the Hawai‘i State Natural Area Reserve (NAR) have focused on reducing the spread of invasive species and protecting rare and endangered species in these areas (Loope et al., 1992). In August of 2005 a network of 12 climate stations was established to extend westward from HaleNet and to integrate with 134 permanent vegetation plots established from 2003-2006 on the northeast slope of Haleakalā Volcano (Figure 49; Crausbay and Hotchkiss, 2010). The climate stations (referred to as “Little HaleNet”) range from ~1980 m to ~ 2315 m in elevation and create three elevational transects from the Northeast Rift to Pu‘u Alaea. Each elevational transect consists of one station in the alpine grassland and three stations that bracket the upper cloud forest limit. The climate stations are equipped with instrumentation to measure precipitation (established 2005), soil moisture (established 2007), air temperature (established 2008), relative humidity (established 2008), photosynthetically active radiation (established 2011) and soil temperature (2005-2008). Vegetation plots are arranged along nine elevational transects and represent points within the upper ~300 m of cloud forest and ~ 300 m immediately above the forest line.

The Little HaleNet climate network has been used to: 1) create climate maps that describe spatial pattern of climate during strong El Niño and La Niña events relative to neutral climate (Crausbay et al., 2014), 2) identify the changes in plant species assemblage and structure due to changes in moisture (Crausbay and Hotchkiss, 2010), and 3) model the strong relationship between the cloud forest’s upper limit and humidity during strong El Niño events and to determine the relationships between cloud forest species assemblage and mean rainfall (Crausbay et al., 2014). The close spatial proximity of the climate stations along their respective transects provides essential information regarding variations in microclimate in relation to the cloud forest boundary. A recent study Gotsch et al. (2014) concluded that the microclimates along these transects affect stomatal conductance and transpiration of the dominant native species (ōhi‘a lehua, Metrosideros polymorpha) found there. The data obtained from Little HaleNet was integrated with data obtained from HaleNet station HN-162 (2260 m), which is located within the Little HaleNet domain, and HN-161 (2460 m) and HN-164 (1650 m) which are above and below Little HaleNet, respectively.