A new documentary, KINGMAKER, is in Honolulu! It will open at the Kahala 8, 4211 Waialae Avenue, this Friday, 11/15. Tickets and schedules are available at this location. 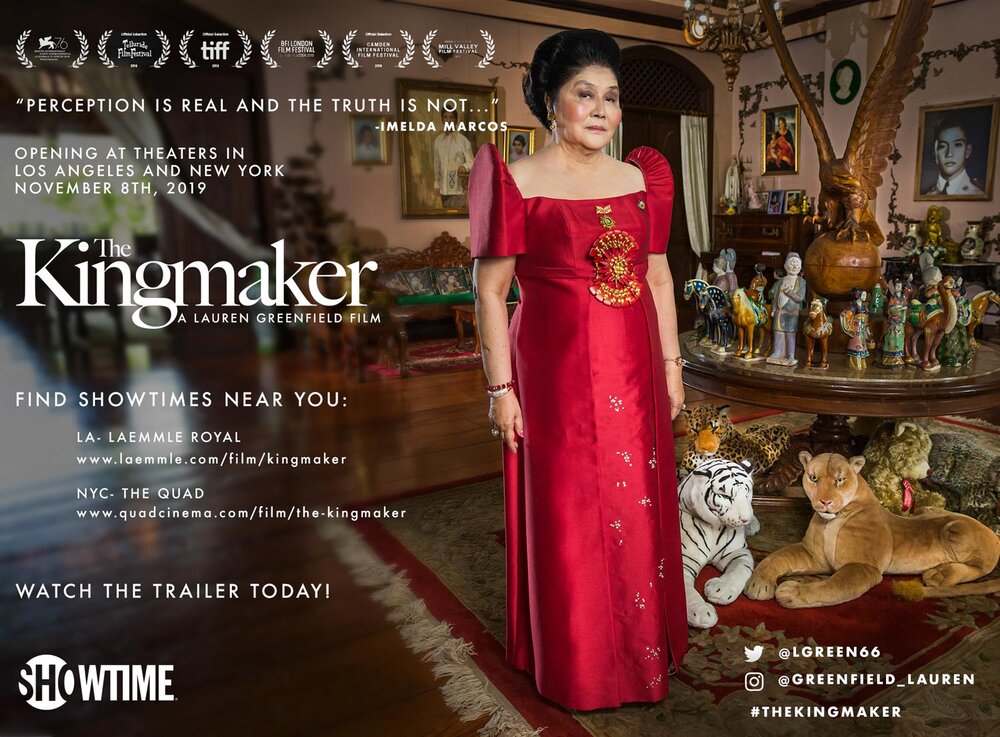 The film examines the Marcos family’s return to power in the Philippines, exploring the disturbing legacy of Martial Law and Imelda Marcos’s efforts to help her son win the vice-presidency. In an age when fake news manipulates elections, The Marcoses’ comeback story serves as a dark fairy tale that is relevant not only to the Philippines, but to the rest of the world, including the U.S.

Recognizing the film’s significance in contemporary Philippine politics, it has elicited two reviews: by Patricio N. Abinales, The Curse that is Imelda Marcos: A Review of Lauren Greenfield’s Kingmaker film, and Cecilia Manguerra-Brainard, “The Kingmaker” Shows the Fragility of Democracy. Both reviewers are based in the US, Abinales a professor of Asian Studies at the University of Hawaii, and Brainard, an accomplished writer from Los Angeles. Abinales ends his review by saying that this film “makes us remember why we as young adults fought dictatorship.” On the other hand, Brainard echoes a chorus reminding us that “those who lived through the Marcos dictatorship, the movie feels like a nightmare.” Interestingly, both reviewers are from the periphery – Abinales hails from Ozamiz City, on the island of Mindanao, and Brainard, from Cebu City, Philippines.

Want to have a Fulbright Experience in the Philippines?
Come and join us in “Magsayod: Knowing Cebuano Language and the Philippine South.”

The UHM Center for Philippine Studies hereby issues a Call for Applications to Fulbright Hays-Group Projects Abroad (FH-GPA) program, a 5-week seminar-training in Cebu City, the Philippines on July 1-August 5, 2020.

The training will focus on:
● Immersion in basic Cebuano language,
● Familiarization of Philippine southern cultures, i.e., Muslims, other indigenous peoples, Cebuano society, and culture in Cebu and Mindanao.