By Vina A. Lanzona
Director

In the second half of the year 2013, the Philippines suffered several tragedies, one after another. During the month of October, a hostage crisis in the southern city of Zamboanga dominated the headlines. A group of disgruntled and rogue Islamic separatists from the Moro National Liberation Front (MNLF) laid siege on Zamboanga City and declared it a Bangsa Moro or Moro Nation, under the leadership of Nur Misuari. The siege lasted for weeks with frequent clashes between government and rebel forces. About 10,000 homes were destroyed and over 200 people killed, which led the United Nations to declare the event a humanitarian crisis. 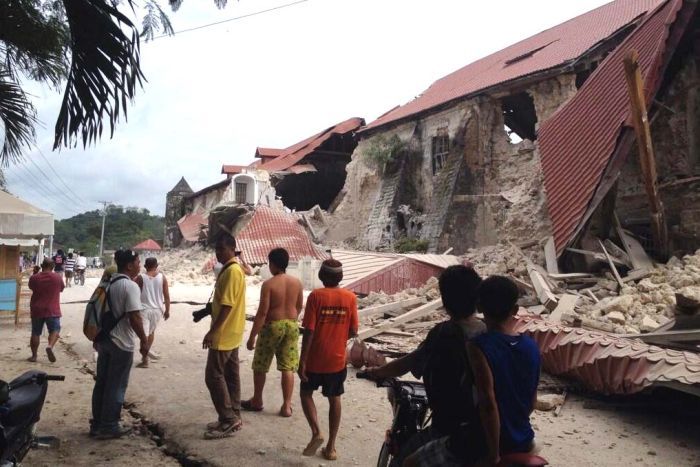 The following month, another tragedy struck when an earthquake with a magnitude of 7.2 shook the Visayan provinces of Bohol and Cebu, the strongest earthquake the nation experienced in more than two decades. Over 220 people died, thousands were injured, and the destruction of centuries-old colonial Churches, broke the hearts of thousands. All these tragedies did nothing to prepare Filipinos for another catastrophic event that occurred in November: the death and destruction caused by typhoon Haiyan, or Yolanda, that swept throughout Central Visayas and was the strongest and most powerful typhoon ever recorded in history. The 315 kmh winds that accompanied the storm surges wiped out entire villages in Leyte and Samar, and led to more than 5000 deaths and 2000 missing. The Philippine government was highly criticized for not acting swiftly and efficiently, in direct contrast to the international relief efforts launched by institutions and individuals from all over the world. 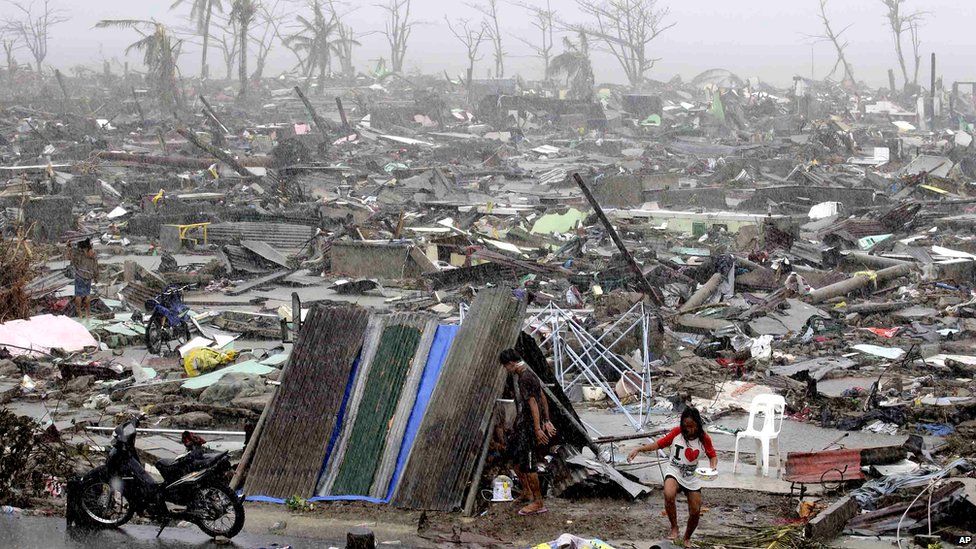 The Center for Philippine Studies, in cooperation with the Filipino community in Hawaii, also sprung into action. Within the first week of the tragedy, the CPS, with its numerous student volunteers set up a table for donations at the Campus Center. It also took the leadership in coordinating the efforts of various organizations and individuals within the UH community. The CPS was present when the Music Department staged a benefit concert at the Kawaiaha’o Church and when student and faculty chefs of the Food Sciences Department held an All-You-Can-Eat (and sold out) Pasta event at the Agricultural Sciences building. From these two events, and several other fund-raising events organized by the Graduate Business Student Association, East-West Center/UH Pinoy, Katipunan and Timpuyog student organizations, SEED, Phi Alpha Theta History Honors Society, the Cancer Center and collections from UH students, staff and faculty, the CPS helped raise a total of $11,520.00. The CPS donated this sum to the Filipino Community Center, where all donations were matched dollar for dollar by the Hawaii-based Consuelo Foundation. Thus, the UH community raised more than $23,000 for the relief and rehabilitation efforts of the communities ravaged by typhoon Haiyan. It was our first major effort at fund-raising, and it was very successful thanks to the generosity of the UH community. 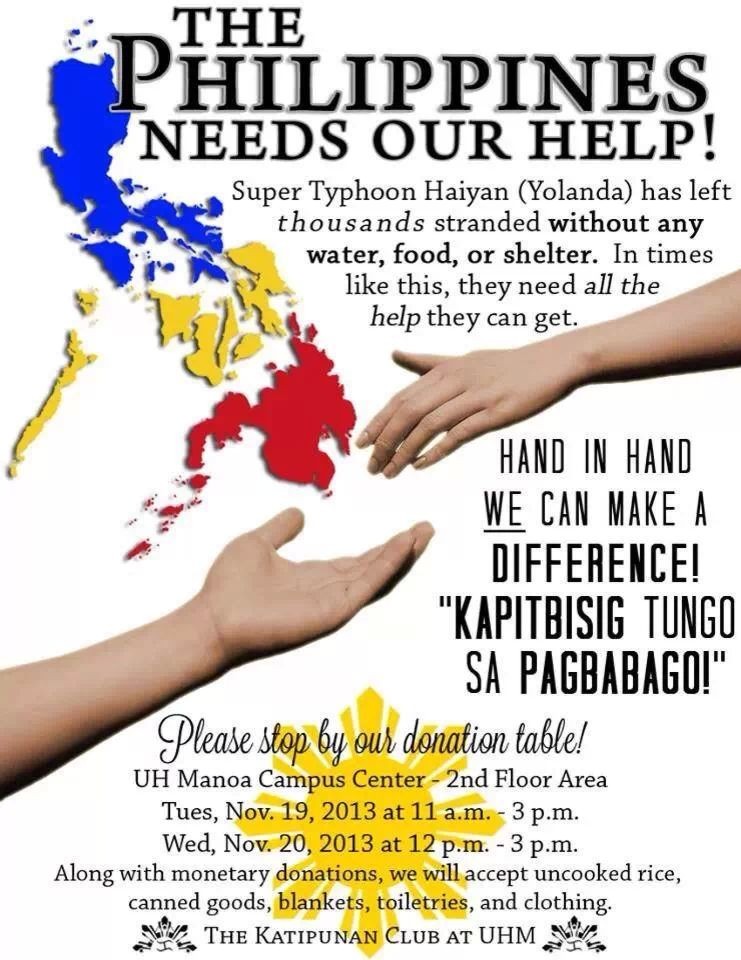 For more information on how the Consuelo Foundation helped to rebuild communities with our donations, please click this Site.

These events obviously dominated CPS work at the end of the Fall semester. But just like previous semesters, we continued our CPS Colloquium Series, and this year’s theme focused on the publications of our own faculty, and welcoming new and old faculty to our Philippine Studies ohana. Professor Vernadette Gonzalez of the American Studies Department launched her new book, Securing Paradise: Tourism and Militarism in Hawaii and the Philippines (Duke, 2013), and Professors Jon Okamura of Ethnic Studies Department and Patricia Halagao of the College of Education presented their recently published essays from a volume entitled, The Other Students: Filipino Americans, Education, and Power (Information Age Publishing, 2012). We also welcomed as a new faculty member, Professor Joyce Mariano of the American Studies Department, who presented her work on the anti-Marcos movements in the US; Professor Francis Dalisay of the Communications Department, on the attitudes of Chammoros and Filipinos regarding US militarization; Professors Anthony Guerrero and Gretchen Gavero of the Department of Psychiatry, on the challenges facing Filipinos in pursuing health careers, and finally, Professor Diane Desierto, the newest addition to the Richardson School of Law, who discussed the controversial pork barrel system in the Philippines. 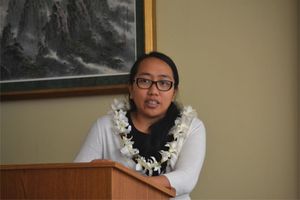 Aside from this very rich series of talks, the CPS also co-sponsored the visits of several important scholars of the Philippines and Southeast Asia. In the Fall, the CPS launched the documentary Marilou Diaz-Abaya, Filmmaker on a Voyage, a moving film about the late award-winning director Marilou Diaz-Abaya by Mona Lisa Yuchengco, the former editor of Filipinas magazine. Our United States Institute of Peace (USIP) grant also funded the travels of three Professors from Mindanao State University: Dr. Faina A. Ulindang, Dr. Samuel E. Anonas, and Dr. Jamail Kamlian, who led a workshop entitled Migration, Elections, and Muslims: A Symposium on Mindanao, which was co-sponsored by Congress of Visayan Organizations and the Philippine Consulate. In the Spring, the CPS co-sponsored the visit of prominent Yale Professor and Southeast Asian scholar James Scott, as well as participated in several activities that featured the environmental lawyer/activist Tony Oposa, who was sponsored by the Richardson School of Law. 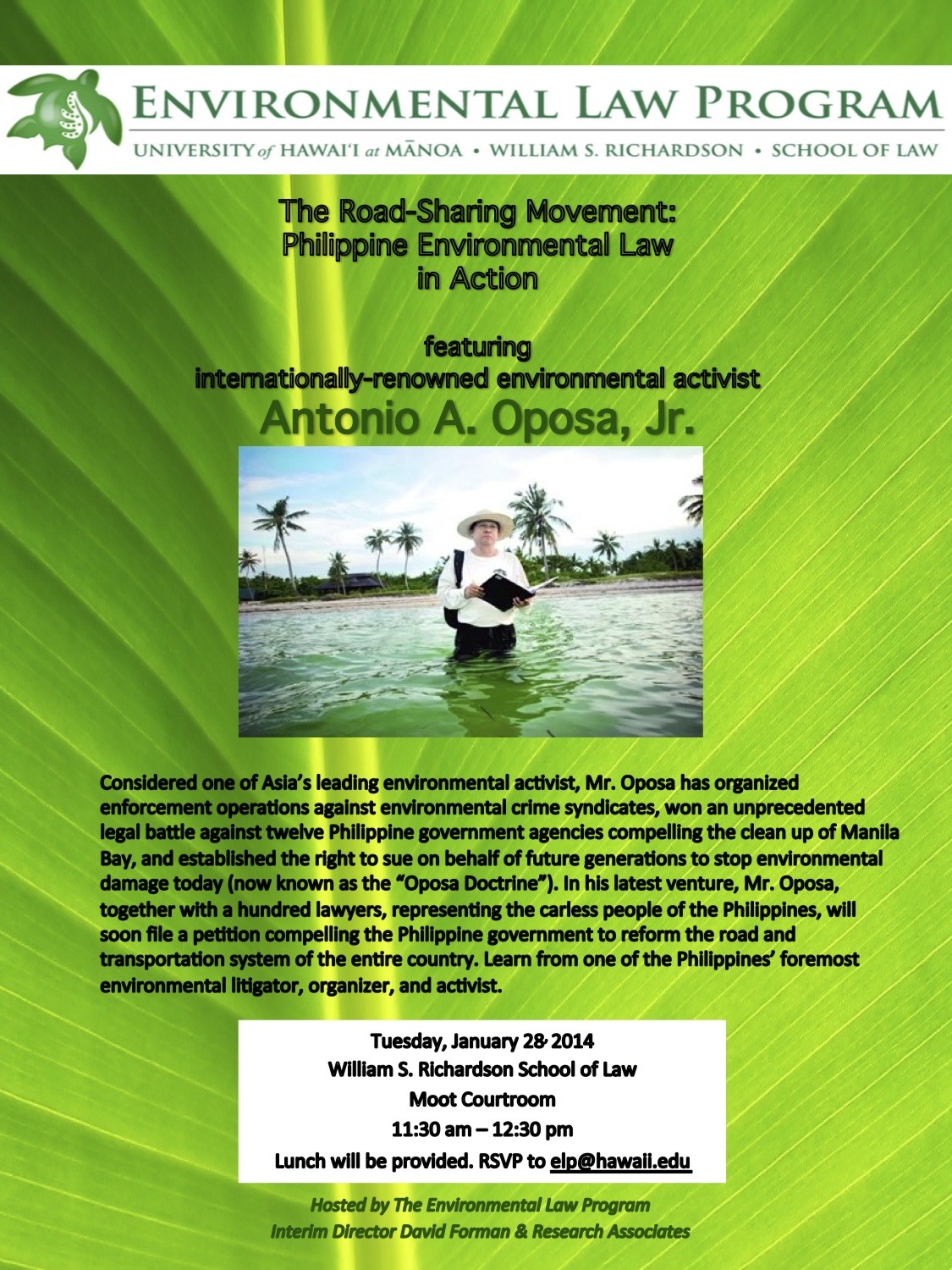 All these events demonstrate the important role played by the Center for Philippine Studies in the intellectual and community life of UHM: from organizing academic talks and lectures, to welcoming new and prominent scholars, and rallying the UH community to assist communities in the Philippines. The CPS aims to sustain this active and important role as it enters its 40th year of existence. Indeed, we are excited to announce that we will be celebrating our 40th anniversary year in Spring 2015, with a variety of activities including an international conference in April, dance performances in May, and community events throughout the year.

We hope that you’ll join us in celebrating the 40th Anniversary of the CPS in the coming year. Please stay tuned and regularly check our websites for updates and upcoming activities!!!