I was in the Philippines from July 18 to August 4, 2013, to do my field research on Mansaka music in Tagum City, Davao del Norte, in preparation for my dissertation. My objectives were to interview musicians about their culture and traditions, and to record Mansaka songs, music, and dance. But I was surprised to learn that a protocol has to be followed in order for me to do research. Supposedly I had to meet the National Commission for Indigenous Peoples (NCIP) and The Department of Interior and Local Government (DILG), and had to secure a Free and Prior Inform Consent (FPIC) to gain access for my research. Usually the process takes about three months and there is no guarantee they would permit me to do my research in the tribal community. So I went to see the newly elected mayor of Tagum City, Mayor Allan Rellon, to ask his help. He was very supportive and immediately called Honorable Datu Rudy (Kimud) Onlos (Tribal Chieftain, Tagum City Federation of Barangay Tribal Council) to allow and assist me in my research. Mayor Rellon believed that my research would benefit their tribal community as well. Also, my classmate in high school, Dr. Janet Veloso, who is now a Division Supervisor of the Department of Education, Davao Region, helped me to negotiate with Mayor Rellon and Datu Onlos, with whom she is close friends. If not for Dr. Veloso, I would have had a hard time doing my research. 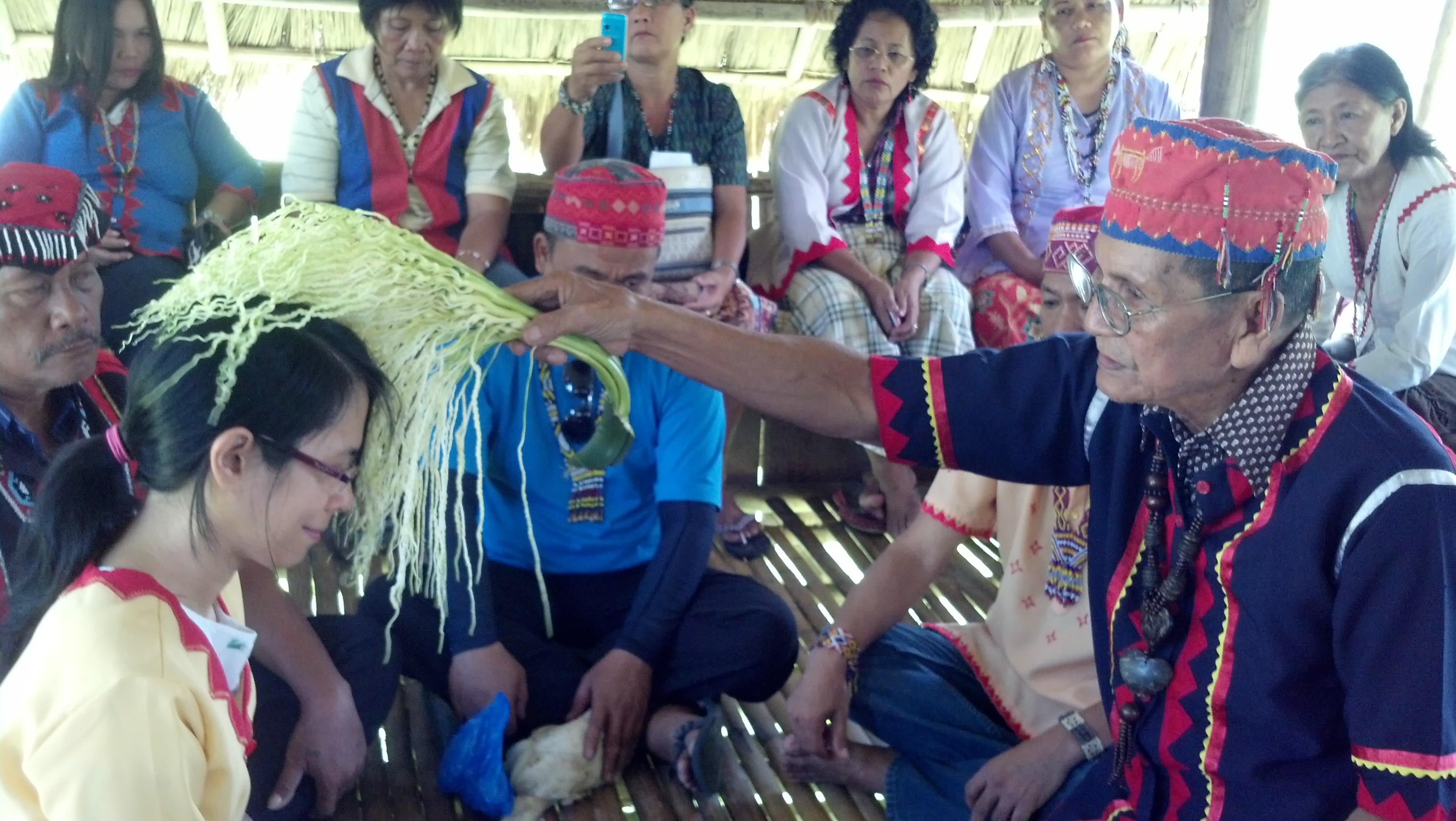 Before I started the research, I was given an Acceptance Ritual, which is one of the protocols, initiated by a baylan (tribal priest) in the presence of other baylan and twenty tribal chieftains from the different tribes – Mandaya, Manobo, and Kalagan. After the ritual, Datu Sucnaan proclaimed, “From now on you’ll be called Bia Joy,” which means “Honorable Joy.” Datu Onlos remarked, “Think of us as your family. Once you have been given an Acceptance Ritual, you are part of our family even if you don’t belong to any of the tribes. If you were not given a ritual, you cannot commune with us. But now you are accepted already by the tribes.” Datu Onlos also added:

“In the old times when foreigners arrived and were accepted by the tribe, they were given a piece of land. But now our problem is that we have only a few lands. We are supposed to give you a piece of land. That is our custom and tradition. If you want, we have it in the mountain; if you want to plant or farm, you can go to our ancestral domain anytime. That is how our system works. We give land right away. That is how our heart works because this is not our land. The Lord entrusted this land to us. So any good man that can be a steward of the land, we give it to him. Just like you, you came and wanted to build a relationship with us, so we also treat you as our sister.” 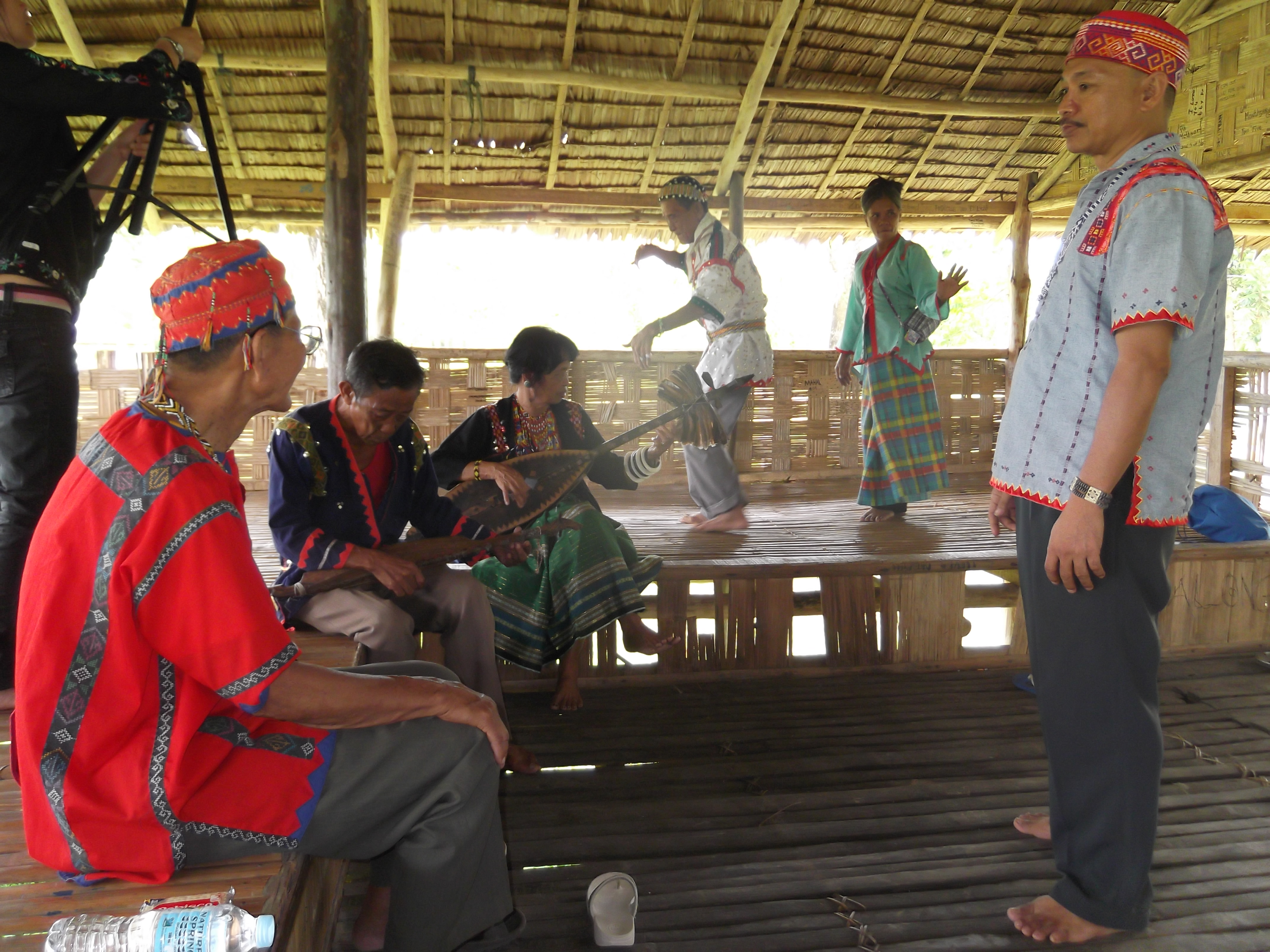 It was an overwhelming experience. They accepted me not only to do the research, but deeper than that, they accepted me as their family member. So whenever I go back to Tagum, I can visit them anytime.

After the ritual I was allowed to start my research. For my safety, Dr. Veloso gave me a bodyguard to accompany me during my entire stay in Tagum. In my research I was able to do the following: Interview Datu Onlos and Datu Aguido Sucnaan (baylan – tribal high priest of Tagum City, Cultural Master and Chieftain of Barangay Mapandan) about their music, culture, and tradition; visit a Mansaka community at Barangay Pandapan; record some of the Mansaka songs, music, and dance performed by Mansaka Cultural Masters; dine and drink wine (made by Datu Onlos) with them; dance with them; and most gratifying of all, learn to play the gimbal and agung and perform with their ensemble. The Mansaka tribe does not record or notate their music. They were kind and generous enough to perform different songs, dances, rituals, and ceremonies for me to record and transcribe.

The Mansaka is an ethnic group found in the southern part of the Philippines, particularly in the provinces of Davao del Norte and Compostela Valley. According to Datu Onlos, the Mansaka, Mandaya, and Kalagan (or Kagan) tribes used to be a single tribe. However, they became divided – some went up to the mountains (Mansaka), some to the upper portion of the river (Mandaya), and some stayed in the seashore or riverside (Kalagan). The Kalagan tribe is divided into two. Half of the group followed the Muslim faith, while the other half retained their traditional faith. 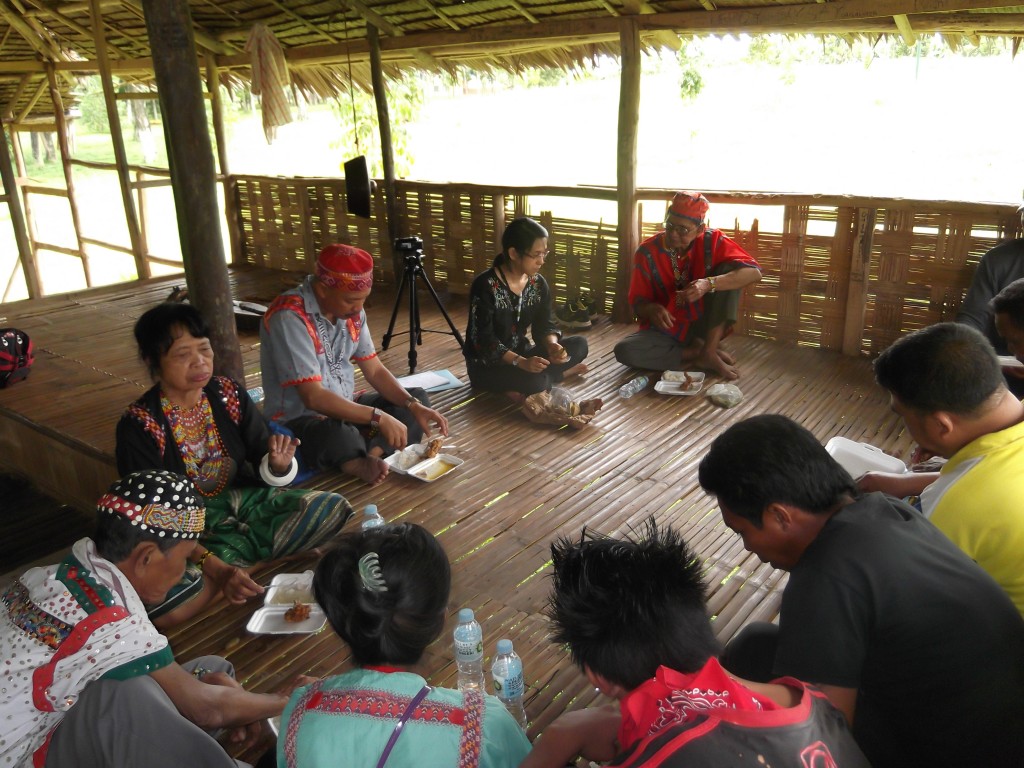 The term “Mansaka” derives from “man” meaning “first” and “saka” meaning “to ascend,” so Mansaka means “the first people to ascend the mountains or go upstream.” Farming is their primary source of living. According to Datu Onlos, the first generation of Mansaka was not open to new development. They wanted to protect their culture and tradition, and going up to the mountain was their way of protecting the community. Datu Onlos also mentioned that they believe in the God called Magbabaya. They also believe in the Holy Trinity – the Father, the Son, and the Holy Spirit (diwata), and Jesus Christ being the tamisa na anak ng Magbabaya (“the only Son of God”).

Mansaka instruments consist of the following: gimbal (double-headed drum made of deer skin); kubing (jaw’s harp); agung (wide-rimmed, vertically suspended gong); kulintang (row of eight small, horizontally-laid gongs); lantoy (mouth bamboo flute); parundag (mouth or nose bamboo flute, bigger than lantoy); and kudlong (two-stringed instrument, which resembles the Muslim kudyapi, where one string functions as a drone while the other string plays the melody). There are three different kinds of kudlong depending on the number of frets: Kyagan (five frets); Panganduan (seven or eight frets); and Binudyaan (thirteen frets). The more frets, the larger the instrument is. If two kudlongs are played together, it is known as bandayon.

While the beginner kulintang player uses a two- or three-gong kulintang, the advanced player uses a five- to eight-gong kulintang. Usually the instruments are played in pairs. For example, the gimbal and agung are played together, particularly for prayer/ritual on Pagtabi; and the kudlong and lantoy or parundag are also played together. The kudlong or any of the bamboo flutes can also be played as solo instruments. The instrumental ensemble consists of gimbal, kulintang (usually from 3 to 8 gongs), and agung. I found out also that two to three players may play on one agung – playing the boss, edge, and rim, creating different colors.

When a Mansaka engages in dancing, the hand and eye movements convey certain meanings. Usually it is a gesture of prayer. A dance for prayer or ritual is called Binalyan – communicating to Magbabaya (God). Datu Sucnaan stated that “According to our ancestors, God finds pleasure when you dance.” Sometimes the dancers imitate the movements of the bird called “kabuwa,” in which the dance step is called “kinabuwa.” This bird usually appears during summertime.

In the Mansaka tribe, dawot is an extemporaneous singing that talks about their history, culture, and tradition. According to Datu Sucnaan, each story has a different babawoy or tonada (tune). There is no written record in their history and it is through dawot that their history is being told and preserved. In a way, dawot is a form of storytelling. As the story is told from one generation to the next, new information is added, thus making the dawot longer and longer. Very few Mansaka are able to perform the dawot, only those who are gifted and given wisdom – anointed ones. Thus, the singer depends on the Holy Spirit as he performs the dawot. Dawot can be sung in a cappella, ideally in high register. It can be accompanied by different instruments but usually is accompanied by the kudlong. While the singer performs the dawot, the audience motivates him through pag-iyak – a sort of shouting, which is the counterpart of Western clapping. Example: “Huh” or “Yahu.”

The Mansaka learn their music through their dead ancestors, who appear to them in a sacred place in Masara Mountain called “Pula,” where only the Mansaka are allowed. Non-Mansaka people are prohibited from going, to keep them away from trouble and sickness. According to Datu Onlos, they hear different kinds of music and instruments in the sacred place. The chosen ones, or what they call the cultural masters, learn their music by listening to the performance of their dead ancestors, who appear to them in human form, and they imitate the melody and rhythm. This may sound strange, but is fact. Datu Onlos himself actually sees and talks to his dead ancestors when playing kudlong in their sacred place. Thus, each of the cultural masters has their own specific music. Until the present time, that was their method of learning music. But of course the cultural masters teach the music aurally to the younger ones. However, if a cultural master notices that the young one doesn’t have an interest, he will not force him. Mansaka don’t have a method of notation but rather they play by ear and imitation. One of the concerns of Datu Onlos is the preservation of Mansaka music. He commented that the younger generation nowadays hardly appreciates their traditional music.

After transcribing several Mansaka songs (dawot) and instrumental music, I discovered that most of their music was constructed in pentatonic scale (a scale consisting of five tones), which is the main characteristic of Asian music. Chanting is a common practice in Mansaka’s style of singing. Ornamentation of the melodic lines is also common both in singing and playing instruments. In instrumental music, the rhythm is set for each kind of music with regular beat and meter. Oftentimes, each instrument plays with a variation of the basic rhythm. The tempo is set from the beginning and it is the same tempo throughout the entire performance. 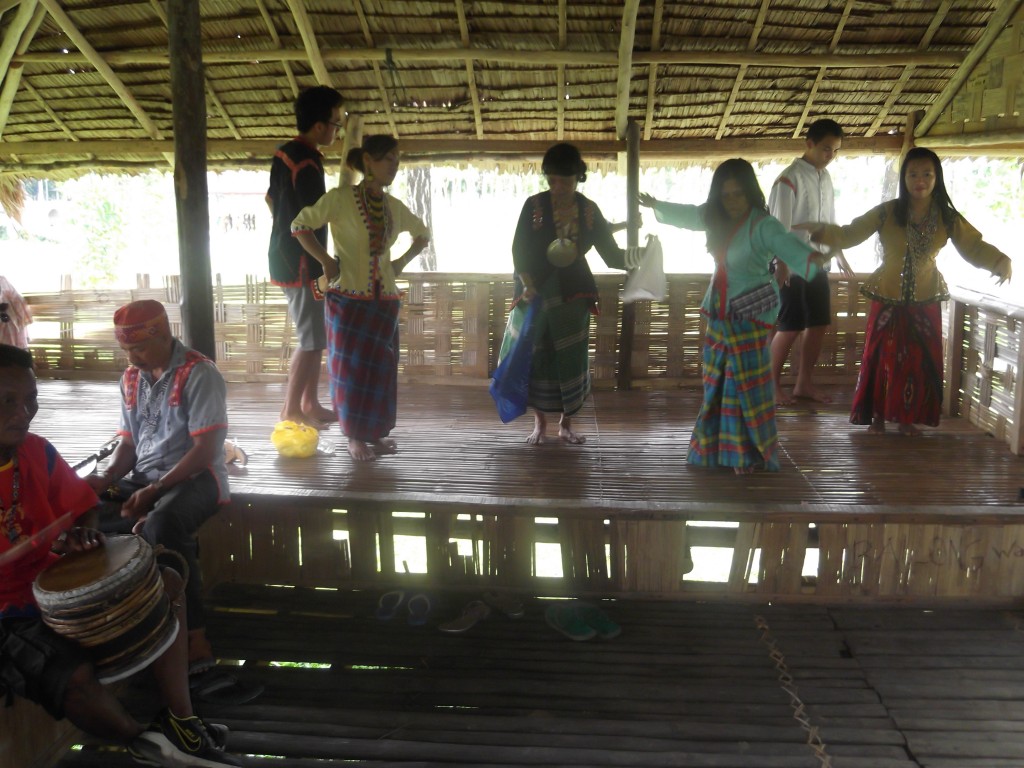 The dance steps correspond to the beat. A change in dynamics will also indicate changes to their movements. For softer sound, their movement is fine, slow, and subtle. For louder sound, there are bigger, faster and sometimes wild hand movements and footsteps. The indication of a sudden change of the dynamics level from soft to loud is called lugoy.

Some pieces are strophic form, binary form, and through-composed. However, depending on the ceremony and occasion, the performance may last for several days. For example, in the wedding and harvest ceremonies, the celebration may last for weeks. Even in dawot, the singer can sing stories about their history and ancestors endlessly.

It was a fulfilling research. Datu Onlos and the rest of the staff of the Tagum City Federation of Barangay Tribal Council were very supportive and made sure that I received what I needed. It was sad news though when I received an email recently that Datu Onlos passed away on July 23, 2014. Indeed, he helped me so much with my research and so I would like to dedicate my dissertation to him.

Joy Marfil is a PhD student in Music at the University of Hawai’i at Mānoa. She is the first recipient of the Belinda A. Aquino International Philippine Studies Endowment. This research is conducted toward her PhD dissertation.