Dr. Amit Ranjan will give a talk at HPU on November 22, entitled “Dare Dara disturb the Universe?: Dara Shikoh’s translations as ‘trance-lessons’.”

Dr. Ranjan is also coming to the UH Mānoa campus on November 21 and would be available to meet. He is addressing Prof. Ned Bertz’s class on “Wanderer, slanderer, philanderer of Hindoostan: John Lang.”  Should anyone want to attend, they can contact Prof. Bertz directly (bertz@hawaii.edu) so he can make arrangements.

Dr. Ranjan’s visit to UHM and HPU are under the auspices of a Fulbright Outreach Lecture fund grant. 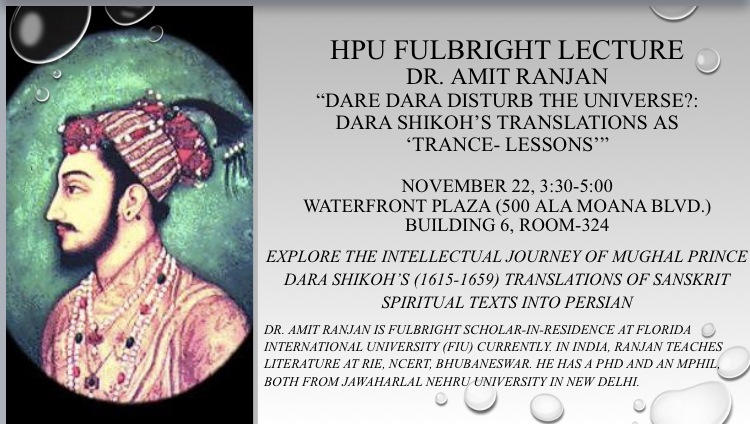 It all stems from one,
Or as mad Sarmad says,
From none.
Some people with their verse –
Dare disturb the universe.

Dara Shikoh, the Mughal poet-prince, comes to limelight at intermittent intervals. This time it is because Dalhousie Road in Delhi has been renamed as Dara Shikoh Road; and also because Audrey Trusche has written a book titled Aurangzeb: The Man and The Myth. Trusche’s illuminating work contextualizes the life of Aurangzeb and attempts to free him from the label of “bigot.” In doing so, however, she plays into the binary of Dara/Aurangzeb : Dreamy poet/ Statesman King all over again in the section that she deals with the conflict of the brothers. Dara is still caught in a moment of “What if?” where counterfactual history starts indulging in a freeplay of imagination.

a) Is Dara Shikoh caught in an inescapable moment of “What If”? Does this infantilize his location within Sufic history, and Sufic history itself? Is the category of poet-king unacceptable to counterfactual conjecture?
b) The impact on posterity – of translations undertaken by Dara – globally; as also understanding ideologies of translations undertaken by him.
c) Dara’s vision: Secular, syncretic, or religious cosmopolitanism? What were his motives in undertaking the task of mapping Indic philosophy onto Islamic theology?

Lang’s body of work is huge – 24 novels (that have been discovered, and more), five volumes of poetry, editorials and articles in the newspaper Mofussilite, editions of which came out from Calcutta and Meerut, and numerous apocryphal works presumed to have been written or co-authored or significantly inspired by him. Most of the novels were written as serials in his newspaper; some were published as books as well from Britain and India.

It is important to reclaim, resurrect and study Lang for several reasons. One, this writer needs to be studied for his sheer skill in subversion of the British Raj while writing from within its institutions. Two, because Lang’s prose throws new light on the history and the turbulent politics of 19th century India, providing new insights into the establishment and consolidation of, as also resistances to the British Raj.

Three, because Lang adds a new turn to postcolonial studies with his precarious position, placed between an Australian gentleman, a British convict’s son, a resident Indian, a firebrand English barrister, and a witty poet and a writer. Four, John Lang’s protagonists being mostly women, who conform to a Victorian sense of propriety, and yet are very independent, his works throw light on emergent gender relations of the times too.

Amit Ranjan is Fulbright Scholar-in-Residence at Florida International University (FIU) currently. In India, Ranjan teaches literature at RIE, NCERT, Bhubaneswar. He has a PhD and an MPhil, both from JNU. His doctoral research about John Lang, a 19th century Australian writer, lawyer and journalist engages with rich primary archival material; and it throws new light at mid-19th century British empire vis-à-vis characters of “interlopers” like Lang.

He was a Fulbright scholar previously as well, in 2015-16, also at FIU. He has also been a recipient of Endeavour Fellowship of Australia, as also the Inlaks Research Grant, courtesy of which he was a Visiting Fellow at UNSW, Sydney. He was also delegate at Australia India Youth Dialogue, 2015, and a writer-in-residence at Sangam House Writers’ residency, 2010. He also holds the honorary position of Australia Awards Ambassador. He has taught literature at institutions like St. Stephen’s, Miranda House, JNU, Jamia Millia Islamia, and FIU.

Lecture and discussion in remembrance of  Prof. M.S.S. Pandian by Prof. Sankaran Krishna

Congratulations to CSAS faculty member Dr. Priyam Das on receiving a Rapid-Response Grant on Covid-19 and the Social Sciences!