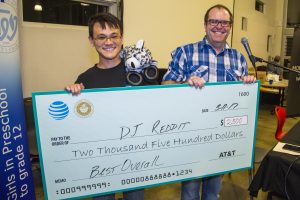 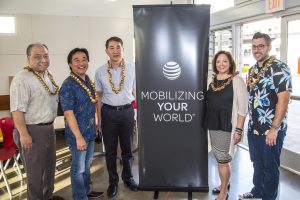 The 24-hour hackathon is designed for those interested in coding mobile apps, web apps, or hacking hardware solutions. Members of Hawaiʻi’s tech community joined to network with students and others interested in technology to see what they could build overnight.

“This was my first time judging this event and I was so impressed by these students and their use of technologies to problem solve,” Senator Wakai said. “Mastering technology is an absolute key to the success of Hawaiʻi. These students are well on their way to successful careers and I’m convinced they will make us all proud.”

The teams had a mixture of creative talent and development skills. They created their web, Android or iOS apps from conception to implementation. Each team had three minutes to present their finished mobile app to the panel of judges.

UH student Clay Nakamura won the best app grand prize of $2,500 for developing an app that takes recommendations from r/listentothis subreddit, downloads the songs and plays them using a Rasberry Pi. He also won $1,000 for the best entertainment and gaming app. The other winning teams split the additional cash prizes totaling $3,500.

The goal of a hackathon is to create a sustainable environment for aspiring and seasoned developers to deploy a mobile app with a website backend that is fully hosted in the cloud. The event also aims to spur innovative ideas and help entrepreneurs and startups build new prototypes and some early market validation.

“The local tech industry in Hawaiʻi is growing and maturing and we’re seeing tremendous growth in skill sets and ideas from year to year as students from both DevLeague and the UH system are leading the charge as the next generation of innovators. Startup Paradise is alive and well and the future is bright as these young innovators will be the job creators of tomorrow,” said Jason Sewell, DevLeague’s co-founder.

Yoshimi said, “This year’s AT&T Hackathon produced another group of outstanding mobile and IoT apps, with nearly 25 teams making it to the finish line. I’m encouraged by the increased participation from the university community as well as some of our high school and middle school students – these young people will be the core of Hawaiʻi’s future technology workforce.”

David Chin, UH professor and chair of Information and Computer Sciences, said a hackathon could produce the next titan in the tech industry. “Imagine what that will do to Hawaiʻi’s image and standing, not to mention boosting the salaries in local tech jobs and stemming the brain drain to the mainland and foreign countries,” Chin said.

“We want to thank the students and all who participated including our esteemed panel of judges,” said Carol Tagayun, AT&T Director of External Affairs. “This hackathon began four years ago with nine student participants, and it continues to grow each year. This growth mirrors the increasing importance of the technology industry in Hawaiʻi.”