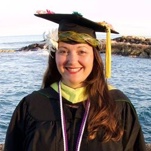 Kimberly Jackson is the recipient of a scholarship awarded by the Hawaii Library Association. A spring 2015 graduate of the LIS Program with an MLISc degree and a certificate in Historic Preservation, Kimberly is currently serving as an intern at the Library of Congress in Washington D.C. She is working in the Preservation and Reformatting Division under the Preservation Directorate.

Kimberly states on her e-portfolio:

I have gained experience in investigating and executing digital reformatting techniques and technologies for media relevant to ongoing and new Preservation Reformatting Division projects… This internship in the world’s largest archives is an unparalleled chance to gain professional experience with mass digitization, preservation, conservation, database building and streamlining workflows.

In addition to Kimberly, two LIS alumni also received monetary awards to further their professional development. Hillary Chang, librarian at McCully-Moiliili Public Library, will use her award to participate in the ComicCon 2015 being held in San Diego. Tamara Martinez, librarian at Kahuku Public and School Library, will use her award to attend the 2015 ALA Conference in San Francisco.

The 2015 winners were formally announced at the Spring HLA Conference held on June 6 at the Treetops Restaurant. Up to three HLA awards are given annually to deserving professionals. These awards are funded at various levels up to $1000. The association’s scholarship committee evaluates the applications and selects the winners.