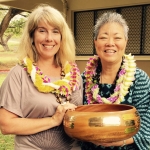 Diane and Michelle have been outstanding representatives of the profession and tireless advocates for libraries as centers of excellence. They were presented with framed certificates of recognition at the HASL conference. In addition, their names were added to a perpetual Golden Key Koa Bowl.

Diane, librarian at Molokai High, has been a leader in critical curriculum initiatives at her school and in the Molokai community. She has served as vice president of programming and co-president for HASL. Diane has also been a powerful voice for librarians in the Hawaii State Teachers Union (HSTA) where she has served on the Negotiations Committee and is currently a member of the HSTA Teacher Leadership Advisory.

Michelle, librarian at Hale Kula Elementary, received national attention in 2014 when School Library Journal selected Michelle as School Librarian of the Year. She has brought exciting technological innovations to her school and is a Google Educator. Michelle has been vice president of programming and HELP chair for HASL. In addition, she has been active in Ka Hui Heluhelu, the local affiliate for the International Literacy Association, serving as a keynote speaker at a recent state conference.