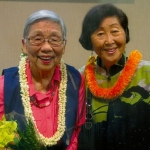 Jane Kurahara and Betsy Young, LIS alumnae, who have been long-time volunteers of the Japanese Cultural Center of Hawai‘i (JCCH) and former school librarians, received the prestigious Frank Haines Award presented by the Hawaii Historic Hawai‘i Foundation in recognition of their lifetime commitment to preserving Hawai‘i’s heritage. The award was presented on May 27, 2016, at the Pomaika‘i Ballroom at the Dole Cannery Square.

In receiving the award, Kurahara and Young were commended for their nearly two decades of work to preserve the Honouliuli Internment and Prisoner of War Camp. Their efforts were capped in February 2015 when President Barack Obama designated the site as the Honouliuli National Monument, ensuring its future preservation.

At JCCH, Kurahara has co-chaired the Hawai‘i Confinement Sites Committee since its inception in 2005. She has led the planning and coordination of outreach presentations, archaeological surveys, and spearheaded the acquisition of key archival collection manuscripts relating to internment. In her professional career, Kurahara was the lead specialist for the Hawai‘i DOE School Library Services Unit for many years. She also served as a librarian at Royal Elementary School.

Capitalizing on her teaching expertise, Young has played a key role in developing curriculum on the Japanese American internment in Hawai‘i. She has conducted numerous outreach presentations to community and school groups and chaired the landmark Day of Remembrance in 2010 that highlighted the Honouliuli internment camp. Along with Kurahara, she co-managed the Resource Center from 2001 to 2006. Before retirement, Young was an award-winning DOE teacher and resource teacher as well as a librarian at Liholiho Elementary School.

Carole Hayashino, JCCH President and Executive Director, said: “We are grateful to Historic Hawai‘i Foundation for recognizing Jane and Betsy for their dedication to preserving and education others on the history of Japanese Americans in Hawai‘i.”