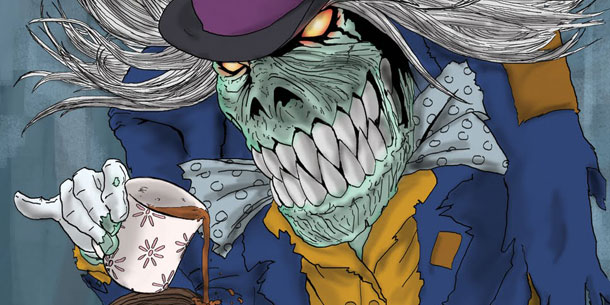 Editor in Chief Will Caron won first place in a national competition for an editorial cartoon he created, which ran in the University of Hawaiʻi at Mānoa Ka Leo student newspaper in May 2011. His cartoon depicts U.S. Congressman and Speaker of the House John Boehner and a Mad Hatter caricature representing the Tea Party.

Judges from the Associated Collegiate Press organization picked Caron’s work from 10 finalists for the award, which was announced October 30 at the National College Media Convention in Orlando, Florida.

“My goal was to make clear the connection between the core Republican strategy of fear mongering and hysteria-cultivating, and the subsequent creation of the Tea Party,” said Caron via email. “Fox News and other media outlets who bought into this strategy only raised the stakes and helped snowball what was once a grass-roots movement that no one took seriously into a full-fledged political entity, ripe with ultra-conservative values that have been tearing voters away from the Republican core ever since.

“Boehner and the Republican ‘wise-men’ sought to play off the ignorance and fear that all too many Americans feel in these difficult times—in order to sway their opinions—but ended up creating a monster they still have yet to tame.”

See a larger version of the cartoon, as well as the accompanying “recipe” on Caron’s blog, Comics by Will.

There were 212 entries submitted in the cartooning awards in two categories—editorial cartoon and cartoon panel/strip. Cartoon entries were judged based on reader impact, community importance, artistic quality, originality and clarity of message.

Caron, a senior art major at the Mānoa campus, is serving his second term as editor of the student newspaper, which distributes 10,000 issues on Monday, Wednesday and Friday.

“I’m hoping to use works like this to boost my portfolio in order to land an illustrating or comics industry job either in the U.S. or in Japan,“ said Caron.

Caron, of Kahaluʻu, is a 2007 graduate of ʻIolani School. He is the son of UH Professor of English James Caron and stained glass artist Michelle Caron, who also teaches French at Hanahauʻoli School.