After the University of Hawaiʻi at Mānoa first placed sharrows—pavement markings indicating a travel lane shared by motorist and bicyclist—on campus roadways in August 2010, the City and County of Honolulu began placing them on city streets around the campus, including Dole Street, Kapahulu Avenue and Young Street.

UH Mānoa and the city produced a share-the-road public service announcement to urge drivers, bike riders and pedestrians to be safe and street smart.

The PSA is part of the Move with Aloha campaign, which is comprised of three initiatives to promote a pedestrian-friendly campus and support sustainable transport. 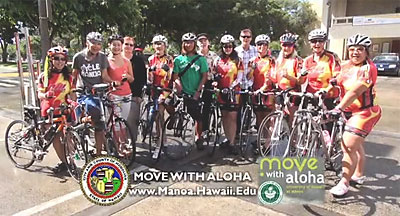 UH Mānoa will continue to work with the city, state and the surrounding community on expanding sharrow lanes on Oʻahu roads and improving sustainable modes of transportation.

Visit the Move with Aloha website for more information.