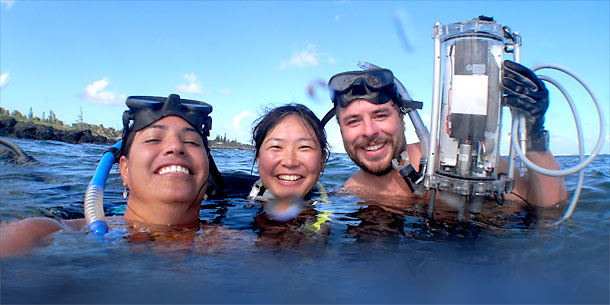 Two easily discernible types of growth anomalies have been observed on rice coral in Hawaiʻi.

In both types, lesions develop into pale protuberant masses, but Type A looks something like a scoop of cottage cheese while Type B appears more like a ball of mozzarella.

Marine scientists at the University of Hawaiʻi at Hilo wanted to know if the differing morphology indicates underlying differences in the affected tissues and whether they affect the corals’ biological functions.

They found that the tissues of growth anomalies had

“All findings from this investigation support the growing evidence that growth anomalies significantly affects coral’s biological function and is, by definition, a disease,” the authors write in the December 19, 2011 online edition of PLoS One Biology.

While the Type B growth anomaly is less prevalent, the tissue showed the most prominent disease signs, suggesting that it is the more severe and advanced stage of what maybe a progressive disease, they observed.

There was no recovery and only limited tissue regeneration evident in the photo monitoring of affected populations conducted by the researchers over three years at the tide pools.

While growth anomalies represent a threat to coral health and warrant more research to identify causal factors and possible role of environmental stressors, scientists haven’t observed rapid or extensive outbreaks such as that seen recently in Kāneʻohe Bay, where rice coral have been affected by a different disease called Montipora White Syndrome.

The Hilo research was supported by the University of Hawaiʻi Sea Grant program.