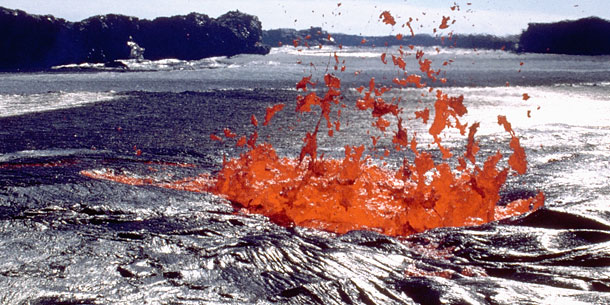 To promote the importance of understanding and respecting the volcanoes on which we live, January is celebrated as Volcano Awareness Month on the island of Hawaiʻi.

Several recent UH-related volcano items are listed below. If you have more to suggest, please add them in the comments.

Impacts of the Kalapana lava flows

Eruptions on Kilauea’s east rift zone have sent lava flows into Kalapana four times over the past 35 years, with vastly different impacts each time.

Kenneth Hon, a UH Hilo professor of geology/volcanology and former USGS Hawaiian Volcano Observatory scientist, will talk about the eruptions, including how they affected the community and helped volcano scientists gain a better understanding of the dynamics of flowing lava.

This talk is part of a weekly series at UH Hilo that concludes January 27 with a talk entitled A Seismic Time Machine: 100 Years of Earthquake Monitoring in Hawaiʻi. Learn more by downloading the full schedule of 2012 Volcano Awareness Month and Centennial Events (PDF).

Kenneth Hon and Cheryl Gansecki of the UH Hilo Department of Geology and Don Thomas, Director of the Center for the Study of Active Volcanoes, are among the experts celebrating the centennial of the Hawaiian Volcano Observatory at a day-long open house.

Highlights include hands-on activities for the whole family, interpretive walks, talks including information on volcano hazards mitigation and a chance to tour the observatory, which is normally closed to the public.

Hike the Footprints Trail to Mauna Iki with Darcy Bevins

Bevens has worked at the Center for the Study of Active Volcanoes for more than two decades, both in administration and in the field.

Study at the Center for the Study of Volcanoes in Hilo

The Center for the Study of Active Volcanoes at UH Hilo is accepting applications for a three-week undergraduate summer course called Field Methods in Volcanology.

The course gives students a chance to work with the instruments a volcanologist uses, collect data on an active volcano and interpret the results. Prerequisites include previous university-level coursework in geology, mathematics and natural sciences. The course website provides more details and contact information.

Program administrator Darcy Bevens, produced this video to share some of the highlights of a typical field trip to the active volcano in the school’s back yard.

UH Mānoa School of Ocean and Earth Science and Technology geologist Kenneth Rubin was among the first scientists to witness exploding rock and molten lava from a deep sea volcano during a 2009 expedition. The findings were published in Nature Geoscience.

The expedition, funded by the National Oceanic and Atmospheric Administration and the National Science Foundation, pinpointed the location of the West Mata volcano, erupting 4,000 feet (1,200 meters) below the surface in the Southwest Pacific Ocean.

“Everything about the eruption itself—how fast, how intense, the ratio of lava to explosive fragments, the amount and composition of gas released—is new to us,” said Rubin.

Watch video of the eruption.

Recent papers published by UH researchers advance scientific understanding of volcanoes. Among them—