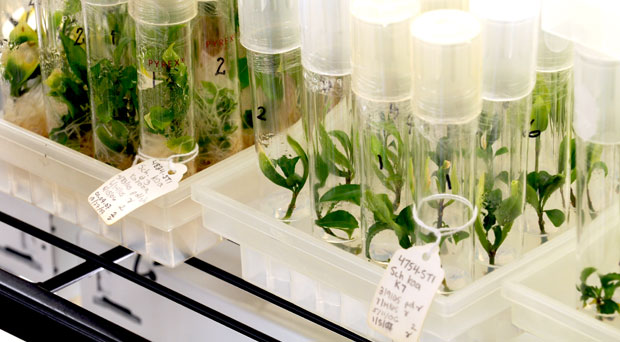 The Chamberlin Family Foundation has pledged $100,000 to support the Harold L. Lyon Arboretum’s Micropropagation Lab capital improvement project. This project will develop significantly greater lab capacity and enhance the critical rescue and recovery work the arboretum undertakes to protect and save the most rare of Hawaiʻi’s native plants.

The new laboratory facilities will nearly double the size of the lab and provide greater storage capacity for endangered plants. It also include a viewing and interpretive component where visitors can view scientists at work and learn from interpretative materials.

“The arboretum’s Hawaiian Rare Plant Program is the primary living plant and seed storage facility for the government and private conservation programs in the State of Hawaiʻi. If we are to meet the pressing conservation needs a larger, efficient and updated laboratory is imperative,” said Christopher Dunn, Harold L. Lyon Arboretum director.

“We greatly appreciate the Chamberlin Family Foundation’s support which will have a tremendous impact on the efforts to rescue, recover and rehabilitate threatened plant species in the State of Hawaiʻi and around the tropical world,” said Dunn.

The arboretum’s Micropropagation Lab, the only one of its kind in Hawaiʻi, is vital in preventing the extinction of Native Hawaiian plant species by maintaining plant and seed bank collection, and propagating plants for use in restoration and reintroduction projects. Currently this lab houses more than 16,000 individual plants and 160 native plant species, which is less than 50 percent of the species requiring protection.

“Approximately 90 percent of the 1,400 plant species native to the Hawaiian Islands are found nowhere else in the world. Consequently, Hawaiʻi has the dubious distinction of being the ‘Endangered Species Capital of the World,’ with more than 300 plant species listed as endangered or threatened by the U.S. Fish and Wildlife Service,” said Nellie Sugii, director of Lyon Arboretum’s Hawaiian Rare Plant Program.

The plants are grown from tissue samples taken from seeds, cuttings and other parts of plants found in the wild by teams of field botanists from state and federal agencies and environmental organizations that work cooperatively with Lyon Arboretum in these joint conservation efforts.

The Hawaiian Rare Plant Program serves as a critical resource for restoring and reintroducing Native Hawaiian plants to the islands and for preserving these plants in a safe environment for the future.