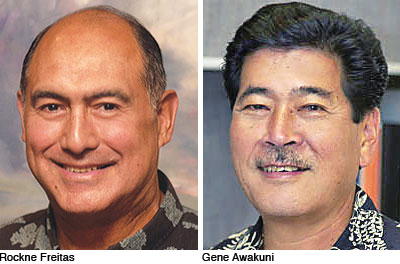 The University of Hawaiʻi Board of Regents confirmed Freitas’ appointment during a public meeting held at UH Hilo on February 21. Freitas is the first Native Hawaiian to lead a baccalaureate campus.

“Rockne Freitas has been instrumental in developing the UH System’s efforts to become the model indigenous-serving university in the nation, ‘Hawaiʻi Papa O Ke Ao,’” said UH President M.R.C. Greenwood. “The UH West Oʻahu campus will serve some vital populations in the area, including Native Hawaiians, Filipinos, and other important groups. His background, talents and life experiences make him an ideal leader for this important campus in the growing area of West Oʻahu and will further the fulfillment of UH’s mission to serve the educational needs of all of Hawaiʻi’s people.”

Board of Regents Chair Eric Martinson said, “We look forward to the impact UH West Oʻahu will have under Rockne Freitas’ demonstrated leadership, with his deep community ties. Also, on behalf of the Board of Regents, I wish Gene Awakuni well in his new endeavors.”

Freitas will work alongside Awakuni from March through April on academic affairs prior to Awakuni’s retirement. He will become chief executive of the new UH West Oʻahu campus in Kapolei beginning May 1. Awakuni was awarded the title of chancellor emeritus and has been appointed senior adviser to the president from May 1 until his retirement in early July.

“It’s hard to imagine that seven years have passed since I first came to UH West Oʻahu,” said Awakuni. “There is a great sense of accomplishment shared by all of us here at UH West Oʻahu in getting this new campus built and opened. It has been an honor and a pleasure serving as the chancellor and seeing this university grow with new faculty and freshman students. Rockne brings a wealth of knowledge and understanding both at the campus and system level, and I am confident the university will continue to grow and thrive under his leadership.”

Freitas said, “I was a C student in high school and athletics was a pathway to higher education achievement. To have reached this point in my educational career is a humbling reminder to me and hopefully for young children out there who hunger to better themselves—if I can do it, you can too. I am honored, privileged and filled with strength to accept this appointment and play a role in helping UH West Oʻahu realize its potential.”