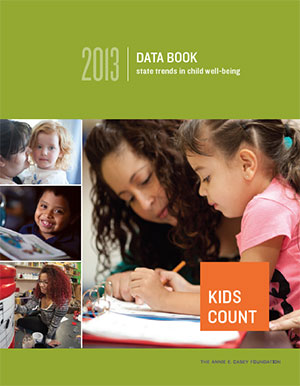 According to data presented in the 2013 KIDS COUNT Data Book, released by the Annie E. Casey Foundation, Hawaiʻi ranks 25th out of 50 states in overall child well-being. The Center on the Family at the University of Hawaiʻi at Mānoa serves as Hawaiʻi’s KIDS COUNT affiliate.

The Data Book presents data on 16 indicators in four areas essential to child well-being—economic well-being, education, health and the family and community context.

“It’s a similar story to what we found last year,” said Ivette Rodriguez Stern, junior specialist at the Center on the Family and director of the Hawaiʻi KIDS COUNT Project. “We’re doing well in the area of health and in the family and community context. And we’ve made some important gains in the education domain, which must be maintained and improved since we’re still hovering near the bottom third when compared to other states. The economic conditions for Hawaiʻi’s children, however, remain a concern.”

Nationally and locally, when it comes to their economic well-being, children fall short of where they stood before the recession. There have been slight improvements since 2010 at the national level; however, the data tell a different story for Hawaiʻi. In 2011, 17 percent of Hawaiʻi’s children lived in poverty (up from 13 percent in 2005); 32 percent had parents who lacked secure employment (up from 26 percent in 2008); and 46 percent lived in households with a housing burden, i.e., where more than 30 percent of monthly household income is spent on rent, mortgage, taxes, insurance, or related expenses (up from 37 percent in 2005). All these changes were statistically significant.

“While the recession ended in 2009, we see the lingering effects, and what’s concerning is that the child poverty rate and the share of children with parents who lacked full-time, year-round employment continued to climb between 2010 and 2011,” said Stern.

The negative effects of poverty on children are troubling in their own right, but they also increase the chances for poor outcomes for youth and young adults, such as teen pregnancy, not graduating from high school, poor health, and lack of secure employment.

“The 2013 Data Book points out that as the number of low-income children increases, the gap between their well-being and that of their middle-income and more affluent peers widens,” said Grace Fong, interim director of the Center on the Family. “This year, KIDS COUNT is alerting us to the importance of focusing on the early years in order to promote healthy child development and to give children a strong foundation for successful educational experiences in school.

For more information, read the Center on the Family news release, download or order the book or go the website and view the Hawaiʻi indicators.