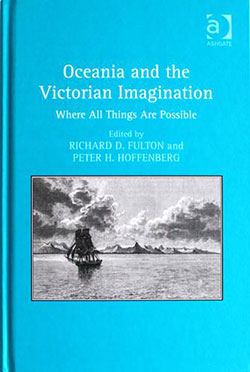 Oceania and the Victorian Imagination, edited by Richard D. Fulton, former vice chancellor for academic affairs at Windward Community College and Peter H. Hoffenberg, associate professor at the University of Hawaiʻi at Mānoa, is available from Ashgate Publishing.

In the book, Oceania, or the South Pacific loomed large in the Victorian popular imagination. Everything was possible there. This collection of essays focuses on Oceania’s impact on Victorian culture, most notably travel writing, photography, international exhibitions, literature and the world of children.

The literature discussed affected mainly the middle and upper classes, while exhibitions and photography reached down into the working classes, as did missionary presentations. The experience of children was central to the Pacific’s effects, as youthful encounters at exhibitions, chapel, home or school formed lifelong impressions and experience.

It would be difficult to fully understand the Victorians as they understood themselves without considering their engagement with Oceania. While the contributions of India and Africa to the 19th-century imagination have been well documented, examinations of the contributions of Oceania have remained on the periphery of Victorian studies. Oceania and the Victorian Imagination contributes significantly to the discussion of the non-peripheral place of Oceania in Victorian culture.