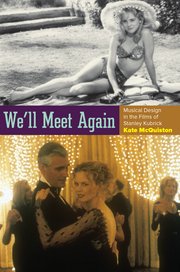 University of Hawaiʻi at Mānoa Associate Professor of Musicology Kate McQuiston has published, “We’ll Meet Again”: Musical Design in the Films of Stanley Kubrick. Her study reveals the importance of music in both the creation and reception of Kubrick’s major films.

The book was a recipient for an award from the AMS 75 PAYS endowment, awarded to small selection of books annually by the American Musicological Society.

McQuiston’s book offers insightful film analyses centered around the score of some of Stanley Kubrick’s most famous films. Much of her analysis is based on rarely-seen archival material. McQuiston focuses on Kubrick’s masterful marrying of music and moving images in his films, arguing that for Kubrick, music is central to the films’ effects and meanings. The book identifies the key elements of Kubrick’s sonic world and explores the ways in which Kubrick uses them to support his characters and define character relationships.

The book also examines the effects of Kubrick’s signature musical techniques, including the use of texture, form and inscription to render and reinforce psychological ideas and spectator responses. Lastly, it presents case studies that show how the history of the music plays a vital and dynamic role for the films.

Overall, the book identifies Kubrick as a force in music reception history by analyzing the relationship between his musical choices and popular culture, and reveals the foundational role of music in his filmmaking.

McQuiston earned her PhD at Columbia University in 2005. Her main research interests are music in film, twentieth-century music, and the philosophy of music.

Her latest articles appear in Music, Sound, and Filmmakers: Sonic Style in Cinema and in The Journal of Film Music.

College of Arts and HumanitiesmusicUH Manoa