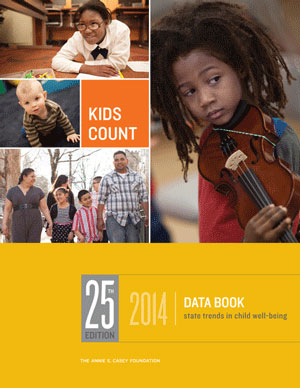 The 2014 KIDS COUNT Data Book, released on July 22 by the Annie E. Casey Foundation, marks 25 years of bringing attention to national and state-level data on the well-being of children. According to data presented in the annual report, Hawaiʻi ranks 25th out of 50 states on overall child well-being.

The report presents data on 16 indicators in four areas essential to child well-being: economic well-being, education, health and the family and community context. Recent trend data (many from 2005–2012) presented in the book show how children did mid-decade prior to the economic recession, compared to how they are faring in the aftermath. Certain conditions for Hawaiʻi’s children have improved during the period examined, however, others have worsened.

“The well-being of our children is the most important indicator of how well our state is doing in terms of longterm economic success and how well we will do in the future,” said Ivette Rodriguez Stern, the Hawaiʻi KIDS COUNT project director. The Center on the Family at the University of Hawaiʻi at Mānoa has served as Hawaiʻi’s KIDS COUNT affiliate since 1994.

“The good news is that we’re no longer slipping in rank where it comes to the overall well-being of Hawaiʻi’s children, as had been the case in recent years. We’re now somewhere in the middle and while we’re doing well in the areas of health and in the family and community context, we’re ranked much lower where it comes to the economic well-being of our children and education,” Stern added.

Over the past two decades, the nation has gained significant knowledge on how to give children a good start and help them meet major milestones throughout childhood. The report addresses this knowledge and policies that set children up for success throughout life. “One of the things that we clearly know from the research is that a focus on the early years is critical in order to promote healthy child development and to give children a strong foundation for success,” said Marianne Berry, director of the Center on the Family. “Children who have access to high quality early care and learning experiences tend to have better outcomes across domains, with life-long benefits. Efforts to improve the overall well-being of Hawaiʻi’s children must, therefore, consider investments in providing our young children with high quality care and education.”

Read the UH Mānoa news release for more information or go to the 2014 KIDS COUNT Data Book website to download the full report.