University of Hawaiʻi at Mānoa astronomer R. Brent Tully, who recently shared the 2014 Gruber Cosmology Prize and the 2014 Victor Ambartsumian International Prize, has led an international team of astronomers in defining the contours of the immense supercluster of galaxies containing our own Milky Way. They have named the supercluster “Laniakea,” meaning “immense heaven” in Hawaiian. 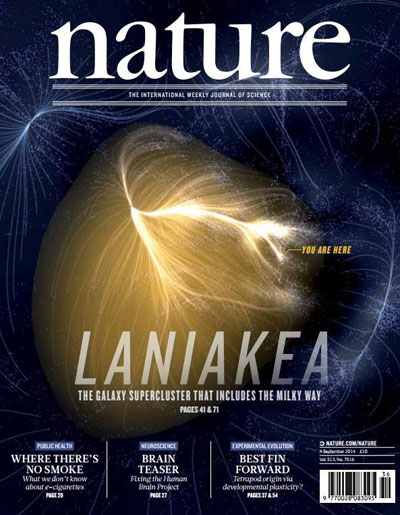 The paper explaining his work is the cover story of the September 4 issue of the prestigious journal Nature.

Galaxies are not distributed randomly throughout the universe. Instead they are found in groups, like our own Local Group, that contain dozens of galaxies, and in massive clusters containing hundreds of galaxies, all interconnected in a web of filaments in which galaxies are strung like pearls. Where these filaments intersect, we find huge structures, called “superclusters.” These structures are interconnected, but they have poorly defined boundaries.

The researchers are proposing a new way to evaluate these large-scale structures by examining their impact on the motions of galaxies. A galaxy between two such structures will be caught in a gravitational tug-of-war in which the balance of the gravitational forces from the surrounding large-scale structures determines the galaxy’s motion. By mapping the velocities of galaxies throughout our local universe, the team was able to define the region of space where each supercluster dominates.

The Milky Way resides in the outskirts of one such supercluster, whose extent has for the first time been carefully mapped using these new techniques. This Laniakea Supercluster is 500 million light-years in diameter and contains the mass of 1017 (a hundred quadrillion) suns in 100,000 galaxies.

This study clarifies the role of the Great Attractor, a problem that has kept astronomers busy for 30 years. Within the volume of the Laniakea Supercluster, motions are directed inwards, as water streams follow descending paths toward a valley. The Great Attractor region is a large flat bottom gravitational valley with a sphere of attraction that extends across the Laniakea Supercluster.

How Laniākea got its name

The name Laniākea was suggested by Nāwaʻa Napoleon, an associate professor of Hawaiian language and chair of the Department of Languages, Linguistics and Literature at Kapiʻolani Community College.

The name honors Polynesian navigators who used knowledge of the heavens to voyage across the immensity of the Pacific Ocean.