A piece of Hawaiʻi’s history was saved and restored by the preservation department of the University of Hawaiʻi at Mānoa Hamilton Library.

Kapa is Native Hawaiian fabric made from certain trees and shrubs. Nine kapa moe, used for sleeping or resting, were damaged in the 2011 Japan tsunami. It happened while the kapa, that dates back as far as the 1860s, was in storage at the Huliheʻe Palace in Kailua-Kona on the island of Hawaiʻi.

“They are all different and they all sort of represent a broad period of Hawaiian kapa making in the 19th century,” explained Lynn Davis, librarian and head of the UH Mānoa Hamilton Library preservation department.

The Daughters of Hawaiʻi, an organization founded in 1903 to preserve the Hawaiian culture, contracted Hamilton Library to restore the kapa. The kapa was kept in a freezer until the project received a grant from FEMA, the Federal Emergency Management Agency. The restoration work began in 2014 and lasted six weeks.

“Mainly, we looked at where it was weakest,” said Davis. “We’ve done mends to be sure that it doesn’t break down more.” 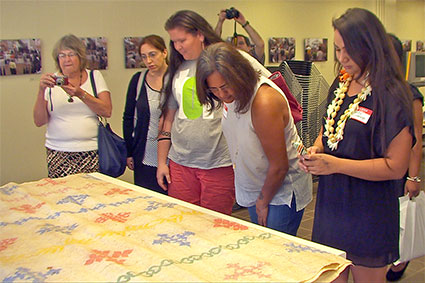 Fittingly, the restored kapa was first presented at the annual Hoʻokele Naʻauao Librarianship Symposium that aims to promote Hawaiian librarianship and its importance in preserving the Hawaiian culture.

One of the kapa on display belonged to Hawaiian royalty, the family of Princess Ruth Keʻelikōlani.

“The kapa represents many things to us,” said Kauwela Valeho-Novikoff, a librarian at the UH Mānoa Hawaiʻinuiākea School of Hawaiian Knowledge. “It’s a cultural expression, it’s our tradition, it’s our aliʻi’s kapa. And it brings with it a lot of mana. And that mana never goes away and never dies.”

The UH Mānoa Hamilton Library preservation department is continuously working to restore everything from library books to historical artifacts like old maps and, in this case, 19th century kapa.