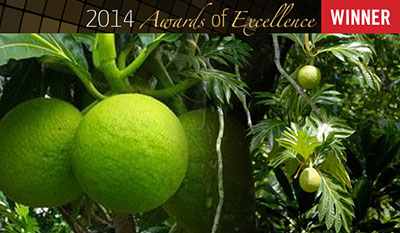 A University of Hawaiʻi project to promote and expand breadfruit use in the Pacific has won a top award from the University Economic Development Association (UEDA). The Pacific Regional Breadfruit Initiative, a project of UH’s Pacific Business Center Program (PBCP), won UEDA’s award for research and analysis in Santa Fe, New Mexico.

Avegalio attributes the Pacific Regional Breadfruit Initiative’s success to the groundbreaking research and analysis led by the National Tropical Botanical Garden Breadfruit Institute and its Director Diane Ragone. That research affirmed the many uses of the breadfruit tree and fruit, or ʻulu, in Hawaiian.

According to Avegalio, breadfruit is gluten-free and the U.S. market demand for gluten-free products is projected to hit $15.5 billion in 2016. Major byproducts of breadfruit include the breadfruit sap that is 100 percent organic latex, and the breadfruit flower, which contains several powerful chemical compounds more potent than those used in the leading synthetic insect repellent on the market. The tree’s wood is resistant to marine worms and termites. The breadfruit tree also has a high salinity tolerance, enabling it to survive inundation from rising tides where traditional food crops such as taro, banana, tapioca and yams cannot.

“There is no better combination for natural food security in the world than breadfruit, together with the coconut tree for water,” said Avegalio.

PBCP envisions Hawaiʻi as the major processing, refinement and export hub to the U.S. market for sustainable and gluten-free food products, such as flour made from breadfruit. The Commonwealth of the Northern Marianas Islands would serve a similar function for the Asian market.

A regional approach is imperative if the developing industry is to achieve fruition within the projected three-year time frame, according to Avegalio. He noted that global food distributor C. H. Robinson moves at least 300 tons of regular flour a week. “No one island group can supply that demand,” he said. “Only a collaborative regional approach can expect to do so.”

Read the University of Hawaiʻi news release for the full story.