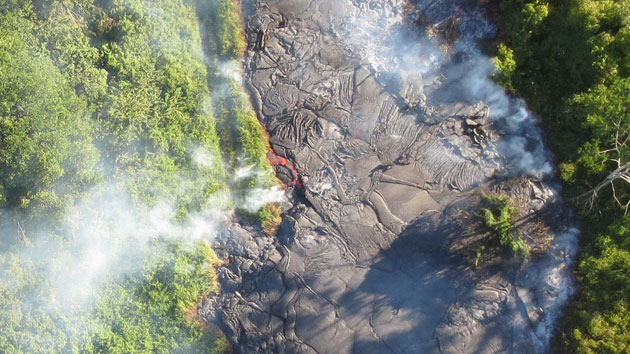 Researchers from the University of Hawaiʻi at Hilo successfully mapped the active flow front of the June 27, 2014 Kīlauea lava flow on Hawaiʻi Island with an unmanned aerial vehicle (UAV) on October 22. In a collaborative partnership with Hawaiʻi County Civil Defense and the U.S. Geological Survey Hawaiian Volcano Observatory, the flight team from the UH Hilo Spatial Data Analysis and Visualization Laboratory used a Sensefly SwingletCAM with a visible camera to collect high resolution stills later merged into a mosaic for use by Civil Defense emergency planners.

The lava flow is headed toward the town of Pāhoa in the district of Puna, threatening to cut off the main highway and other access roads, thus isolating an area of about 10,000 residents from the rest of the island.

“The lava flow has already impacted the lives of many residents in Puna,” said Perroy. “Our UAV support can provide quick and accurate information to emergency responders.”

The team closely monitored the flight performance of the UAV aircraft as it travelled over the lava and noted minor turbulence as it crossed the thermally dynamic environment. A county helicopter provided support with an air observer on board from the UAV team during flight operations.

The Unmanned Aircraft Systems Integration Office of the Federal Aviation Administration worked closely with the Hilo research team on approval of their certificate of authorization. The flights are in direct support of disaster relief operations in the area and the FAA and flight team worked together to make sure all safety concerns were met.

The UH researchers plan to fly again and continue supporting relief operations with quick aerial assessments when needed. Sensefly representatives are closely monitoring and supporting the team’s mapping relief effort and are at-the-ready with additional equipment should it be needed.