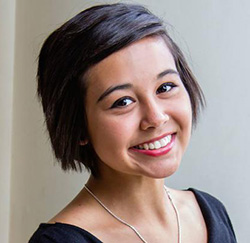 University of Hawaiʻi at Mānoa senior Amanda Shell has been named one of 12 semi-finalists in the Second LabTV Tribeca National Video Awards Contest, winning a $500 cash award. This was Shell’s first entry into the scientific journalism competition, which also included entries from professional videographers. LabTV requested short videos about researchers and what motivates them, and received entries from colleges throughout the country.

Shell is a student employee at the John A. Burns School of Medicine’s communications department where she helps produce news stories and video reports for both the medical school’s website and for occasional distribution to local television news programs.

For her vidoe, Shell profiled UH researcher Angel Yanagihara, whose expertise is in box jellyfish. Yanagihara has developed a therapy that effectively treats the sting of a box jellyfish. Her “sting stopper” helped swimmer Diana Nyad battle stings as Nyad made history swimming from Cuba to the United States in 2013.

Shell followed Yanagihara into the pitch-black waters off Waikīkī at three in the morning while Yanagihara collected the box jellyfish.

LabTV is an innovative, web-based video platform that showcases short, engaging videos of young medical scientists in labs across America. The mission of LabTV is to inspire today’s high school and college students to become “tomorrow’s heroes of medical science.”

In announcing the awards, LabTV’s founder Jay Walker noted, “It is an honor to share the work and passion of young scientists who have dedicated their lives to searching for the breakthroughs that will give all of us a better future. And we are equally excited to recognize the amazing work being done by young filmmakers on university campuses around the country who are on their way to celebrating hidden stories that the world needs to hear.”

Read the John A. Burns School of Medicine story for more.