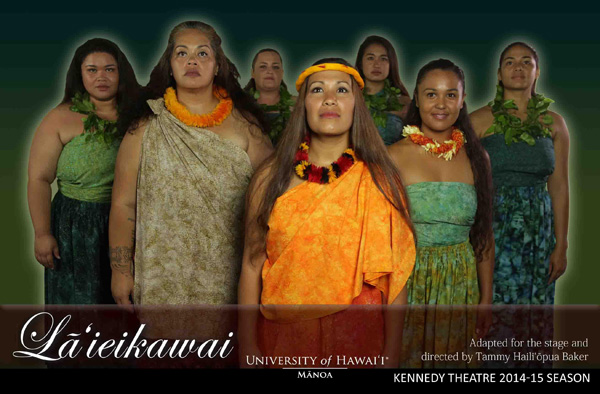 The Department of Theatre and Dance at the University of Hawaiʻi at Mānoa presents the third Mainstage production of this season, Lāʻieikawai. This new play is the inaugural production of the Hawaiian theatre program at UH Mānoa.

Lāʻieikawai, adapted for the stage and directed by Assistant Professor Tammy Hailiʻōpua Baker, follows the story Lāʻieikawai (played by Kauʻi Kaina), one of the famed Lāʻie twins Lāʻieikawai and āʻielohelohe, who were separated at birth. The story focuses on her isolation from the outside world and the numerous suitors that seek her hand. Among them is Kauaʻi chief ʻAiwohikupua

20 years in the making

The show will be performed in ʻōlelo Hawaiʻi (the Hawaiian language) and marks a turning point for the department and for the university on a much broader level. A work 20 years in the making, a fully realized Mainstage Hawaiian show is finally coming to the University of Hawaiʻi.

Baker’s academic work focuses on the revitalization of Hawaiian language and culture, particularly in the realm of theatre. She is a co-founder of Ka Hālau Hanakeaka, a Hawaiian medium theatre troupe whose productions have toured internationally and throughout the Hawaiian archipelago. In addition to her Hawaiian medium plays, Baker’s English and Pidgin (Hawaiian Creole English) plays have been produced at many theatres in Hawaiʻi.

But just as it takes a village to raise a child, it takes many minds and sets of knowledge to stage a production. As specialization was practiced in traditional Hawaiian society, a cadre of kumu, or teachers/experts, contribute their expertise as collaborators on this groundbreaking production.

Kumu Kaliko Baker, an instructor of Hawaiian at Kawaihuelani Center for Hawaiian Langauge, serves as the dramaturge and language coach for the production.

Kumu R. Keawe Lopes Jr., assistant professor at Kawaihuelani Center for Hawaiian Language, currently teaches Hawaiian language courses that include the study and practice of mele to enhance language acquisition and is working with original compositions of chant and hula for the production. Kumu Keawe and his wife Kumu Tracie Lopes are kumu hula of the award winning hālau hula Ka Lāʻōnohi mai o Haʻehaʻe.

Snowbird Puananiopaoakalani Bento is kumu hula of the prestigious hālau, Ka Pā Hula o Ka Lei Lehua. Kumu Snowbird is contributing with original mele compositions and choreography for the production. Both hālau will be featured in a hula segment in the production.

This production is presented by the Department of Theatre and Dance and is hosted by the Asian Theatre Program. It is also co-sponsered by the UH Mānoa Hawaiʻinuiākea School of Hawaiian Knowledge, the Kawaihuelani Center for Hawaiian Language and Haleleʻa Arts Foundation.

Tickets for Lāʻieikawai are available online at etickethawaii.com, by phone at (808) 944-2697, at participating outlets, and at the Kennedy Theatre box office. The box office is open from 10 a.m. to 1 p.m. Monday through Friday, with extended hours on performance dates.

All service fees are included in ticket prices. For more information, please visit the Kennedy theatre website or call the theatre at (808) 956-7655. For disability access, please call the theatre.