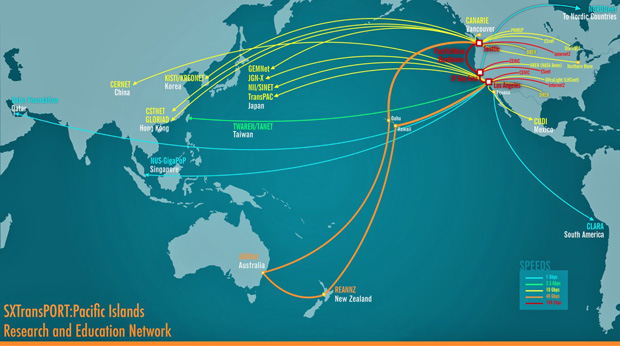 The National Science Foundation has awarded the University of Hawaiʻi a five-year, $4.6 million grant to support the international research and education network connections in the Pacific.

The grant will support the U.S. costs associated with two 40Gbps (gigabits per second) links from Australia and New Zealand to the U.S. via Hawaiʻi. These links are provisioned over submarine fiber optic capacity provided by the Southern Cross Cable Network to Australia’s Academic and Research Network (AARNet) through a unique partnership established over a decade ago. As part of the five-year project, these links will be upgraded to 100Gbps each in 2016.

The project will also provide a focus for UH to work with Pacific Island colleges, universities, governments and stakeholders to develop research and education network capabilities for the Pacific Islands. These islands, which are on the front lines of climate change, are the last part of the world with no coherent regional research and education network initiative. While lack of affordable communications infrastructure has been a barrier for many years, submarine fiber optic cables now connect some of these islands.

“UH has a long and rich history as a leader in academic networking and internet development in the region,” said David Lassner, UH president and principal investigator for the grant. “The first international internet connection to Australia was implemented over 25 years ago as a partnership between AARNet and UH, and we remain uniquely positioned to lead this effort as the premier research institution in the Pacific.”

For the full story, read the University of Hawaiʻi news release.