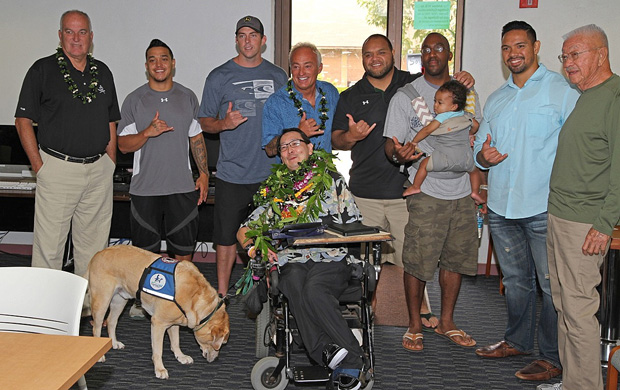 The University of Hawaiʻi at Mānoa College of Education announces the founding of the Brian Kajiyama Heart of a Warrior Scholarship, established by former UH Warrior Football Coach Jeff Reinebold under the June Jones Foundation. The scholarship is designed to help students in Hawaiʻi who have overcome great personal challenges to succeed in continuing their post-secondary education.

“This project has been eight years in the making, and we are grateful to the June Jones Foundation,” said Reinebold, who chairs the Brian Kajiyama Scholarship Fund.

An instructor in the COE Department of Special Education, Kajiyama was born with cerebral palsy. Growing up, he says he dreamed of playing for the Warrior football team, but focused instead on academics. While pursuing his graduate studies and mentoring other students with severe disabilities, he was appointed graduate assistant coach by Jones. Kajiyama would be part of the Warriors staff during two of the team’s most successful seasons in history (2006–2007).

“Coach Jones looked past Brian’s disability and saw his abilities,” added Reinebold. “Brian was a daily reminder of the power in belief, embodying true toughness and exhibiting what a positive attitude can accomplish. This scholarship honors his true warrior spirit and ensures his inspirational story will continue to be heard.”

In 2008, ESPN chronicled Kajiyama’s contributions to the Warrior football team and his friendship with Reinebold in a news segment titled, “Heart of a Warrior.” He is the only person with cerebral palsy to ever have had an on-field role in NCAA Division IA Football.

“Our future must be built on solid foundations, which start with education,” said Kajiyama. “It is my hope that this scholarship can give children, who have gone through and triumphed over adversity, a better chance to earn a college degree, which will open many doors of opportunity. I am grateful to Jeff Reinebold and Coach June Jones for allowing this dream to become a reality.”

Contributions to the fund are accepted through the June Jones Foundation at P.O. Box 11330, Honolulu, HI 96828.