The Hawaiʻi Natural Energy Institute (HNEI) has commissioned a “fast-fill” high-pressure hydrogen fueling station at the Marine Corps Base Hawaiʻi (MCBH). This state-of-the-art station was developed to support a fleet of General Motors Equinox fuel cell electric vehicles leased by the Office of Naval Research for use by Marine Corps and Navy personnel on Oʻahu.

The fuel cells in these vehicles work by using hydrogen to create electricity that is then used to power an electric motor. The only emission is water. Successful hydrogen fueling operations will help identify zero emission sustainable transportation solutions.

“We have been really impressed with the fill speed and control algorithms of the hydrogen station at MCBH,” said General Motors’ Hawaiʻi Site Leader Chris Colquitt. “It is exciting to experience consistent four-minute 700 bar fills.”

Added HNEI Director Richard Rocheleau, “We are excited that the MCBH hydrogen station is now servicing fast-fill by the drivers without an attendant—a first in Hawaiʻi. We hope that our research efforts will help accelerate the deployment of hydrogen stations throughout Hawaiʻi as it contributes to the Department of Defense’s energy goals.”

The development of fuel cell and hydrogen technology has been part of the U.S. Department of Energy portfolio since 1986. UH Mānoa and HNEI have been part of that program since its inception.

The project has received funding support from the U.S. Department of Energy, the State of Hawaiʻi and the Office of Naval Research. 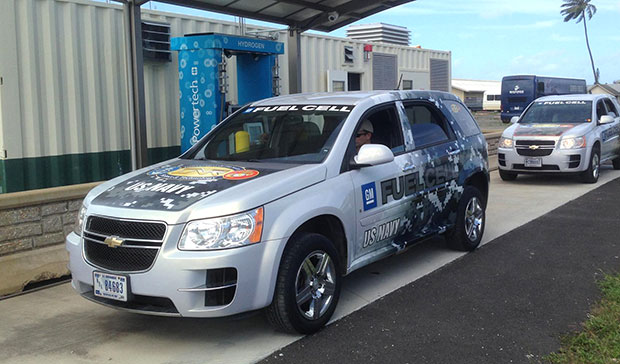