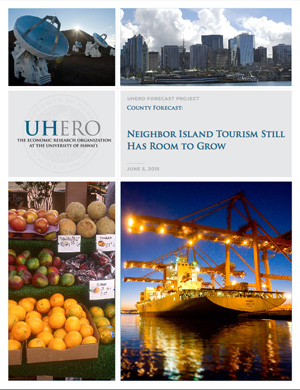 The University of Hawaiʻi Economic Research Organization (UHERO) releases a new forecast, predicting a rise in tourism on the neighbor islands and more.

After a rather soft 2014, the counties are poised for better performance over the next several years. Tourism will see additional healthy gains on the neighbor islands for the next two years, before rising occupancy and costs begin to bring down growth rates, something that has already occurred on Oʻahu. Construction, which has disappointed so far, will become a significant contributor to growth. Gains in employment have brought unemployment rates down substantially, and moderate expansion of jobs and income will continue, helping to solidify the local spending leg of the economic expansion.

For the full public summary go to the UHERO website and for a detailed analysis, subscribe to UHERO’s Forecast Project.