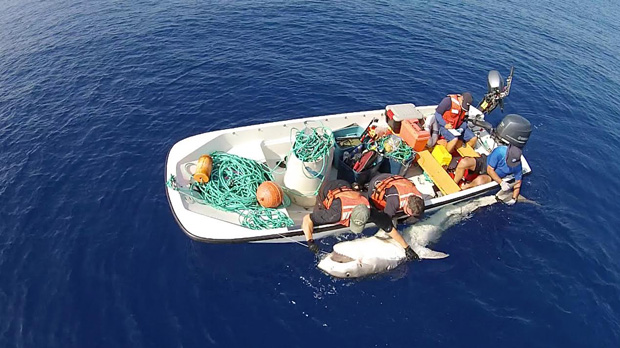 A new paper, published this month in Science, details the explosion in aquatic animal tracking research over the past 30 years and its impact on discoveries about the movements, migrations, interactions and survival of both common and elusive aquatic species.

The review, co-authored by Kim Holland, researcher at the University of Hawaiʻi at Mānoa Hawaiʻi Institute of Marine Biology (HIMB), describes a profound revolution, including more than 20 examples of scientific breakthroughs, in global ocean observation science achieved through advancements in acoustic and satellite telemetry—tracking via electronic tags placed on organisms ranging from tiny neonate fish to large whales, which transmit data to fixed or mobile receiver stations or orbiting satellites.

Electronic tags can now weigh less than a penny, can transmit for more than 10 years, and can be attached to almost any species, at any life stage—allowing the monitoring of organisms whose habitats range from the poles to the tropics and the photic zone to the abyssal depths.

“The vastness and impenetrability of the ocean has historically limited our ability to acquire and process information on animal movements. Telemetry has significantly enhanced our capacity to predict and plan in the face of climate change and human influence,” said Sara Iverson, scientific director of the Ocean Tracking Network and corresponding author on the paper.

Acoustic and satellite telemetry studies are being combined with other biological measurements like genetic analysis or physiological status. These data help determine drivers behind animal behavior to forecast how anthropogenic and climate changes will affect species and populations.

“At HIMB, we have used these techniques to reveal the unexpectedly wide range of movements of tiger sharks in the islands and demonstrate how yellowfin tuna (ahi) keep warm during deep dives into cold water,” said Holland.

These discoveries, and the increasingly sophisticated technology behind them, generate critical knowledge towards conservation recommendations. Tracking studies also pinpoint successes and limitations of current management plans. For example, acoustically tagged reef fish were shown to regularly move outside their Marine Protected Area, putting them at risk.

“In the future, we could be looking at spatially dynamic MPAs, which move annually with predictions of animals’ response to their environments,” said Nigel Hussey, lead author and researcher at the University of Windsor with the Ocean Tracking Network.

Aquatic animal movements and migrations transcend geopolitical, economic, and management boundaries. Telemetry studies in the last decade have documented movement over transoceanic scales, to regions unreachable by humans, and into some of the harshest parts of the ocean, providing the groundwork for “next-generation aquatic governance frameworks.”

“The ocean will continue to change,” said Hussey. “Global collaboration—among industry and science sectors, and researchers themselves—is imperative to get ahead of these changes before they catch up to us.”